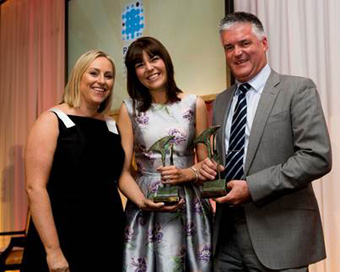 The National Standards Authority of Ireland’s campaign ‘Check Your Insulation Products and Installers are NSAI Certified’ has been named Best Public Sector PR Campaign for 2016, at the recent Excellence in Public Relations Awards.

A record number of organisations entered the competition this year, with 217 taking part in the awards, which have been dubbed ‘The Oscars of PR.’

Working with the NSAI, Carr Communications’ PR Account Manager Sinéad O’Donnell devised a communications strategy in September 2015, to try and make consumers aware of the importance of high standards in retrofit insulation work and warn them of the potential dangers of not using certified insulation products and installers.

Traffic to the List of Registered Installers page on the NSAI website grew by over 147%, while the campaign also achieved widespread media coverage reaching an estimated broadcast audience of over 4 million, as well as an estimated 776,456 readers.

Carr Communications’ PR Account Manager Sinéad O’Donnell said the campaign would not have been possible had it not been for the support received from NSAI registered installers.

“We engaged with the NSAI’s registered installers, asking them to send us pictures of substandard insulation work they may have been asked to fix by customers. These images really helped drive the message home to consumers of the damage that can be caused to your home, if insulation is not properly installed or the right materials are not used.”

A new partnership between the Irish Research...