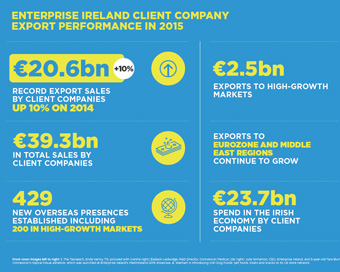 Significant growth was recorded in exports across all sectors and in the majority of export territories according to the official figures published by Enterprise Ireland today. In particular there were increases of:

Julie Sinnamon, CEO of Enterprise Ireland said: “Enterprise Ireland’s role is to help Irish companies export globally. The 2015 export figure of €20.6 billion demonstrates the scale of the success that Irish companies are seeing in terms of winning business at record levels internationally. Significantly, growth was recorded across all sectors and we are seeing that diversification into high growth markets is a focus for our clients.

“The UK remains our largest export market, but we are seeing a trend whereby the exports to the UK as a proportion of our total client exports has declined from 45% in 2005 to 37% in 2015, as more companies have diversified their export strategies into Northern Europe, the USA and high growth markets including China, India, the Gulf and Brazil”.

Minister for Jobs, Enterprise and Innovation, Mary Mitchell O’Connor TD said: “Irish companies continue to deliver for the Irish economy and the figures announced today show the strength and capabilities of Irish companies competing at a global level. I would like to congratulate the exporters and also Enterprise Ireland for supporting these companies in achieving these record exports”.

A key aspect of Enterprise Ireland’s strategy was the co-ordination of trade missions to high growth economies including China, Africa and the Middle East.  This was backed up by a wide range of inward buyer visits, market study visits, international trade fairs, Embassy events and knowledge seminars, all aimed at linking Irish companies with international buyers, leading to increased exports and jobs for Ireland.

MFI To Cut Interest Rates And...

The National Standards Authority of...