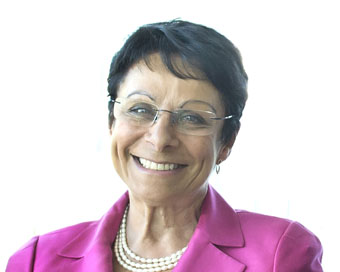 Communication expert NilaKanthi Ford is softly spoken, but the softness of her tone belies the sharpness of her intellect. A graduate of English and Maths, she credits the former with honing her language skills and the latter with giving her a logical, linear way of thinking.

Both have been useful in a career that has spanned the world. Ford, a very youthful grandmother with energy to burn, grew up in Sri Lanka, was educated in the UK, and works worldwide from a base in Dublin.

She began her career in television, covering politics and business at ITV and the BBC. This led to an opportunity at the advertising company McCann Erickson (now McCann Blue), where she says working directly with client companies was like “jumping across the fence”. From there she has built a worldwide reputation as a consultant who can help businesses work together better.

The type of communication Ford talks about is such an integral, often unnoticed, part of business and life that – ironically – it’s rather difficult to explain. “Large corporations have a sense of invincibility while trying to communicate their business. The language one company uses internally is completely different from another and there can be mismatches in takeovers,” she explains.

One example she cites is a large American firm where she assisted after acquisitions in different countries became unwieldy. “It had a large number of subsidiaries across Europe and culturally they were very different from the parent company while also being very different from each other – the German, French, English and Italian divisions were all very different. So the acquisitions weren’t destined to be the most successful.”

Surprisingly, it’s not a bottom-up process. “You have to start at board level. If you can’t get understanding there, it is very different to change an organisation, you are using sticking plasters and they are not all waterproof.”

“Women are wired differently – they are far more open to trying to communicate. But at board level there are typically more men than women, so there is less communication and more action.”

These days, her company Satamana coaches and mentors start-ups including dotcom entrepreneurs. The culture of dotcoms means many start-up founders think they can show up in a t-shirt to a meeting, whereas, Ford points out, in Asia or the Far East, that would be seen as immensely disrespectful. A culture of informality can be an issue for many Irish businesses.

“The Irish have always succeeded well because they are a people who emigrate and travel. But the culture of ‘it’ll be grand’ translates well in the US but not so effectively in Asia. The informality of the Irish versus, say, the formality of the City of London… in the US, Irish colleagues get away with it but even within Europe they don’t get away with it. They need to work at spotting where to adapt, or they could lose years of significant investment by making the wrong decisions. They need to use a more considered approach.”

Companies seeking to expand abroad would be well advised to heed Ford’s advice; she has worked with some of the world’s biggest brands, including British Gas, Shell, Aer Rianta, Credit Suisse; GSK; Indian Oil; and KPMG.

Ford is also (voluntary) chair of the Ireland-India Business Association (IIBA), where she has an enormously ambitious programme to complete during her term.

With expertise across a range of sectors, Ford is well placed to spot opportunities that are being missed by government and enterprise alike. For example, she notes aviation and aerospace (Ireland hosts 90% of the world’s aircraft leasing) as an area to watch, where Ireland has “huge hidden gems” that could lead to far more international business.

“All over Ireland there are smaller companies doing widget manufacturing for aviation… it hasn’t to date been consolidated as a pan-Ireland sector and promoted globally.”

Pharma, IT, agri-food and education are all on her hit-list and she has set up a working group on each sector to “deepen understanding and dialogue”.

The IIBA will host its conference ‘Ireland:India – Culture, diversity and women in business’ on Thursday 24th September 2015 at UCD, Smurfit School of Business, Blackrock. For bookings, see here.

Adolescents these days are preoccupied by...

As thousands descend on the National...