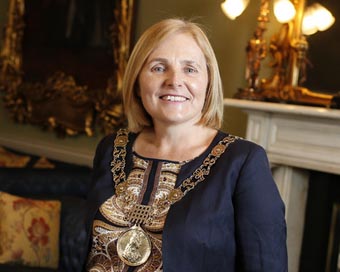 Adolescents these days are preoccupied by social media and the latest smartphone but by her mid-teens, Dublin’s latest Lord Mayor was already a veteran of the protest march.

It may not have been inevitable that Críona Ní Dhálaigh would become Ireland’s eighth female Lord Mayor, and Sinn Féin’s first, out of a grand total of 346 office-holders, but it was definitely written in the stars that she’d become a politician.

The second in a family of four children based in Crumlin, Ní Dhálaigh grew up in a very politically-aware environment  – as a teenager some 30 years ago, she supported the famous anti-apartheid campaign by Dunnes Stores workers, and also marched for Irish language rights and the provision of an Irish language TV station.

“We were brought up in an environment where we discussed human rights issues, current affairs and Irish language rights at the dinner table”, and her father was so committed to the Irish language that he refused to buy a television because he felt it didn’t cater for Irish speakers.  “My father raised us to be Irish-speaking, and we were always very aware of his political beliefs,” recalls the 49-year-old mother of adult sons.

This of course was long before the advent of TG4 – and that early passion for the Irish language persisted, right into adulthood, as Críona went to work first for Conradh na Gaeilge and later for An Coimisiún le Rincí Gaelacha, where she helped organise the Irish and World Dancing Championships.

After a spell working in a school in Belfast, Ní Dhálaigh worked as an administrator in Trinity College’s Arts Department regularly joining campaigns on issues that were of interest to her.

However it was 2002 before the mother-of-two joined Sinn Fein, initially working on the campaign to elect Aengus O’Snodaigh to the Dail before taking over the management of O’Snodaigh’s constituency office after he won his seat.

In 2006 she was co-opted on to  Dublin City Council.  “At the time I was also the only SF female councillor on Dublin City Council, so it was very important to have female representation. That was the main reason why I allowed my name to go forward,” she recalls.  Ní Dhálaigh initially viewed the role with a little apprehension but once in the Chamber, she quickly realised that her presence was important – she was able to bring a much-needed female perspective to issues, she says.

“At the time, Sinn Fein was pushing for more female-elected representatives in as many places as possible and the party was very supportive of me – it really understands the importance of having women elected representatives.  Three years later she was elected to Dublin City Council and re-elected in 2014, before taking up office as the city’s Lord Mayor earlier this year.

While still deeply passionate about the Irish language, O’Dhálaigh intends to use her time in the Mansion House to tackle what she believes is the capital’s single biggest issue – the lack of housing for families, and what it could mean down the road not just in terms of another damaging property bubble but in the worst homelessness crisis this country has ever experienced.

“I am worried about a bubble, but I’m also very worried about the fact there are 1,112 children in emergency accommodation around the four local authority areas of Dublin.”

“This is a terrible indictment of our society. It also shows the lack of a political will to resolve the issue,” she says, adding that she’s very aware that the majority of people in emergency accommodation are mothers and children.

“My biggest fear is that we’ll eventually have the spectre of families with children sleeping on the streets of this city. It’s a nightmare scenario and without government intervention it’ll happen as early as this winter.”

Dublin City Council is struggling to cope with a budget deficit of €18 million, she points out:  “Without  government intervention  we’ll have families and children sleeping on the streets because the City Council will not be able to fund or provide payment for the emergency accommodation  in hotels and B&Bs.”

“That’s my biggest fear, and as Lord Mayor I’m trying to ensure this will not happen.”  She has written repeatedly to Alan Kelly T.D., Minister for the Environment, Community and Local Government seeking an urgent meeting to discuss the impending crisis in the homeless service.  Although the Minister has agreed to meet with a cross-party delegation from Dublin City Council including Ní Dhálaigh she says, no date has been set. “I fear we will spiral very quickly from a housing crisis to a housing emergency,” she declares.

[At the time of publishing the Lord Mayor is still requesting a meeting with Minister Alan Kelly.]

West Clare is not where you expect to find...