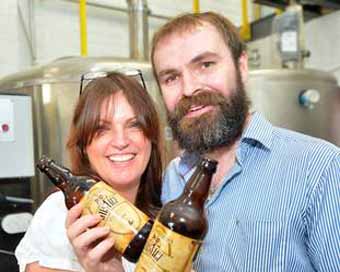 As thousands descend on the National Ploughing Championships in County Laois next week (22nd – 24th), there will be a group of attendees who are there for business, not pleasure.

Jacqui Kelly, who runs Kelly’s Mountain Brew with her husband Ronan (both pictured), was invited to attend by the Kildare Local Enterprise Office. She spoke to WMB about running a business with her husband, how beer was always in the family and her love of art.

What made you both take the leap from consumers to brewers?

Ronan had been brewing as a young man in the foothills of Mount Errigal Donegal. I had a grandmother who was a keen brewer, and between us, we had both travelled extensively before we had ever met, and subsequently since meeting, during which times, we both had a keen interest in beers and where they came from. Many European countries would have a tradition of microbreweries, and many of these towns would have local speciality brews.

Before setting up our own microbrewery, Ronan and I had been living in Qatar. Whilst out there, we had been keenly watching how the global market was growing in craft beer, and in Ireland things where looking extremely healthy too. And so, a year after we got back home to Ireland, we decided to take the plunge and set up our own microbrewery, a dream come true for both of us.

What was your background before brewing?

You represented Kildare at the National Enterprise Awards – how big a role has the the Kildare LEO played since you began?

Kildare LEO have been invaluable to us. With advice, mentoring and funding, not to mention the opportunities such as the national ploughing championship! We see this as an incredible platform that allows us to affordably market our beers to a massive audience.

Why did you decide to get involved with the Local Enterprise Village?

It was definitely an opportunity we couldn’t pass up on! Such an amazing platform for us to show our craft beers and further develop our brand name.

With the craft beer market growing and growing in Ireland, how do you ensure your beers stand out?

We have created a range of beers that are diverse, from easy going pale ale to a complex award winning Ruby Porter, in essence we try to suit a broad range of pallets, that coupled with quality and consistency help us to ensure we stand out. We want our customer to get the standard of beer they expect from us.

What challenges do you think Irish entrepreneurs are most likely to face?

Securing finance can be difficult, keeping your business going, particularly when it is growing very fast requires a lot of juggling and self-belief! Everybody wants credit from a new company, however it is often difficult to secure credit for yourself. So, a lot of money is leaving the company, and a lot less coming in. this can be hard to maintain.

Do you have any advice for someone considering going into business with their wife/husband/partner?

Ideally, one of you should stay working and taking in a wage for as long as possible. Setting up your own business requires a lot of time, patience and money and when these start to run out, it gets stressful! Be prepared for the highs and the lows, and continue to believe in your selves and your business. Have a plan in action if the business doesn’t work out, as it is difficult to make coherent decisions during stressful times such as your business folding and having no money.

How do you switch off from work?

Playing with my son, walking the dog, catching up with friends, and sometimes, dusting down my guitar.

How important is communicating directly with your customers via social media etc.?

Extremely important! Your online presence is integral to your customer as it helps them relate to your company/product and for you to relate to them. We can also keep them updated in events to come such as tastings, meet the brewer nights, competitions and so on.

What are your plans for Kelly’s Mountain Brew in the future?

We are currently about to double our production in late September 2015, and our next phase of expansion will be in March 2016. I am hoping to grow our national sales portfolio via Musgrave’s and Supervalu, who have proven invaluable to us from the start of this enterprise. And we are currently in talks with European distributors, and hope to further develop our export market. Onwards and forwards for Kelly’s Mountain Brew…

You can visit Kelly’s Mountain Brew in the Local Enterprise Village at the National Ploughing Championships from 22nd – 24th September 2015.