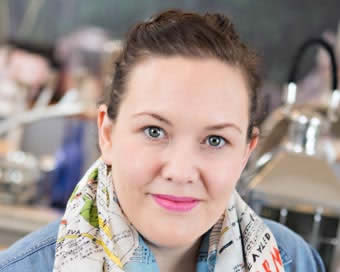 A quick browse of the award winning Kai Café + Restaurant’s website and you’ll soon be licking your lips.

This is quite an achievement since Jess and her Irish husband David Murphy established their Galway city restaurant just four years ago. She took a bit of a detour before finally arriving at the City of Tribes. Initially Jess worked as a chef in her native New Zealand, went on to Australia, then to the UK (where she met her husband in Wales) and on to Dublin. “I wanted to work with a really good top Irish chef so I flew over from New Zealand to work with Kevin”, the Michelin starred chef Kevin Thornton, that is. Jess stayed for a year but got itchy feet which finally landed her in Galway.

She describes Kai’s menu as “local, seasonal, real food”. The restaurant is a 45 seater venue, has a 22 person team and is very much at the heart of the community. “It’s a local’s restaurant really, which is what I am so proud of. In Galway there are a lot of tourist restaurants and that’s all good and fine but I do my own different style and take on things.”

Some might balk at working with their partner but Jess says she and David are a great team. “We have been married 14 years this year. We are pretty free thinkers – we are both Aquarians so if it hits the fan we are both going to have a panic – but generally we are absolutely grand.”

David manages front-of-house and Jess is the head chef so while they work 14 hours a day in the same restaurant, they hardly ever see each other. “You’re not glued at the hip and you both get on with certain jobs and both services are so different.”

A Passion for Ingredients

Jess is diligent about sourcing her ingredients: “I think if you buy seasonally then you will get value for money. You might have onions in your drawers and loads of apples upstairs wrapped in newspaper but if you buy them and make hay when the sun shines – for example make chutneys, jams, jellies – you make it work for you.”

She loves being in Galway where they have access to great suppliers, who are making cheese, goats milk, and almond milk for restaurants like Kai. “If we do get hold of something we nurture it and we nurture that business by using them. It’s more of a slow food ethos than it is business, business, business. Because if you wanted to be a millionaire you surely wouldn’t go into a restaurant. It’s all about the love and enjoying it.”

Jess was inspired to become a chef by her grandmother and the acclaimed American chef and TV personality Julia Childs, both of whom were “the main matriarchs” in her life. Although running a busy kitchen can be stressful she has considerable experience under her belt: “I’ve been a chef since I was 16 when I started my training. I think over time you get older and wiser and you don’t make the same mistakes. You have a good team behind you – you pay peanuts you get monkeys but if you pay for a good team you get a good team.”

The gruelling hours can be a real challenge for many chefs who work, on average, a 12 to 14-hour day. For female chefs the stakes can be high as Jess elaborates: “I know lots of women my age and they still haven’t had kids because they wanted to go ahead with their career. Then you see women who have stopped and had kids and then the hours are crazy so it’s not ideal when you do have them.” She reflects “everything is a challenge; life is a challenge so you kind of just have to get on with it.”

In March, Jess got to mix and mingle with her peers at the PARABERE Forum in Spain. This international independent non-profit platform featured women’s views and voices on major food issues. She cites speakers Karina Dobrotvorskaya, the President and Editorial Director of Brand Development at Condé Nast International, and Alan Jenkins from The Observer as being particularly inspiring.

With an indefatigable work ethic, not unlike her hero Julia Childs, Jess “would like to open another restaurant soon. Also I am working on a book with Barbara Collins who is a food writer in Northern Ireland. There are lots of things in the pipelines that we are working on.” Surely a national award is headed her way soon?

Weaknesses: I don’t write anything down so that is definitely the number one major issue.

Alternative career: A florist or a butcher, either or. I wanted to be a butcher and my dad wouldn’t let me. He has just got to the point where he has accepted that I cook for a living. It’s not really a career choice for a small town New Zealand woman.

Mantras, amongst others: Don’t run with the wolves….stick to your guns and what you actually like; and be yourself.

Even over the phone, Denise Tormey’s...

Mary Curtis, you could say, became a primary...