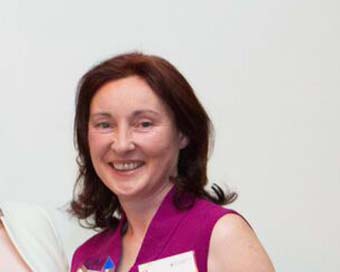 Even over the phone, Denise Tormey’s energy hits you like a whirlwind. She’s an unstoppable force, and Silicon Valley is the pragmatic Galwegian’s latest conquest.

Tormey’s experience while studying Business and IT at the University of Limerick (UL) led her into technology.

She completed two co-op placements during college – co-op is the university’s signature difference – one at CIE Tours in New York, and the second at Digital in Galway, with the second growing into her first graduate job opportunity.

While at Digital, Tormey trained as a chartered accountant and spent time in different parts of the company learning where IT and finance interacted. Completing her audit training (she is a qualified chartered accountant), she says because she was “young, and knew how to use a PC”, she was sent on any technology-related audits. It paid off.

Over pints in UL’s famous Stables, sports-mad Tormey and three male friends had agreed that they would set up their own company. Scattered by the four winds afterwards, they made their dream a reality in 1998, founding PlanNet21 Communications, in order to fill a gap they’d perceived in the communications infrastructure market. “There was a gap for networking and we found a new way of doing it… we got a bank account, became a tenant at Galway Technology Centre, and we put in our seed capital.”

Within a short space of time they were partnering companies like Cisco, and now Tormey describes PlanNet21 as a global company, with bases in Dublin, Cork, Galway, Belfast, Silicon Valley and France.

Setting up the company was hard work, but, “we had barely a car between us, no mortgages, and we worked all the hours. We latched on to Cisco as they got into new areas, things like network over IP then voice over IP, then video and data, it’s all converged over the years”.

It was cutting edge, “but being first in can leave a lot of scars! The tech needs tweaks, that kind of thing. We were the go-to for US companies in Ireland and then in Europe.”

Over time, she says, they saw the power in technology companies moving to the US. She’d been to San Francisco once for a weekend, did a two-day recon with assistance from the Enterprise Ireland relocation office, and upped and went in January 2013, along with her husband and children. It’s expensive, but she found a great school for the kids, the working hours align, her husband works remotely for PlanNet21, and the standard of living is fantastic.

She’s amusing on the differences between networking in America and Ireland; the weather never changes in California; politics is too controversial, and she doesn’t know enough about US sports to bluff it. Even the Irish game of who you know in common or where you are from is useless.

“You talk about the association, ask where someone is from… ‘Malaysia… that’s nice’… is where that leads! It took me a while to figure out that you can’t do the informal drive-bys you can do at home, you must have an introduction, you get 15 minutes and they decide from that whether you’re going somewhere or not. You had better make it work so you need your taglines and your elevator pitch!”

They’d previously lived in Glanmire, Co Cork, and she returns as often as possible. It was on one such visit home, while taking her kids to Blackrock Castle Observatory in Cork, that she realised the night sky here is too cloudy to provide year-round information. She suggested placing a telescope at her children’s US school, got the University of California, Berkeley, involved, and has created Project Tara, a signature project for the institution, all from a brief chat with a staff member.

Being the only woman in the room at meetings has never bothered her. “Women’s groups ask me to go along and that’s no problem but I’ve never felt the odd one out, I’ve always been one of the lads. I’m the oldest of seven and my dad has a sawmill. I was home for a wedding last weekend and I ended up spending Monday helping dad in the sawmill.”

Her advice to others starting out? “Be anything you want, work hard and be honest”.

Following her talk at the PCH Hardware...

A quick browse of the award winning Kai...