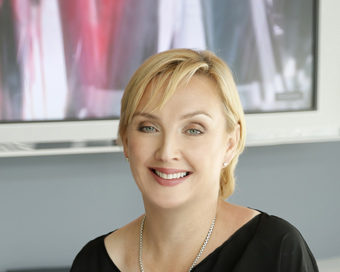 Mary Curtis, you could say, became a primary teacher for the wrong reasons and went into television for the right ones.

After graduating from St Patrick’s Teacher Training College in the 1980s, Mary spent three years teaching because her mother and aunt were teachers and she thought it was the thing to do. Then, thinking she’d like to try something else, she took a career break. And never went back.

Now in her forties and one of the most senior women in Irish television-land – she is UTV Ireland’s Director of Channels – that career break was instrumental in helping the Carlow native find her true passion in life. “I probably became a primary teacher for the wrong reasons,” she recalls. She had a great job in a lovely school, she says, but a nagging desire to get into the journalism/broadcasting sector, drove her to take a range of night courses in media and broadcasting.

From Career Break To Big Break

Once she was on the career break and available for work, she attracted some interest, primarily she thinks, because of her degree in education and her interest in young people. She got her first break from John McColgan and Moya Doherty (the Riverdance co-founders), who took her on as a researcher.

She was involved in the renowned ‘School Around the Corner’ series and later moved into RTE where she did a year in light entertainment, before joining the Late Late Show as a researcher.

She later trained as a producer/director, which led her to produce shows of all kinds – young people, arts, entertainment, and documentaries: “Off The Rails was one of the most successful programmes I did and that was great craic.” RTÉ was a fantastic place to work, she says: “If you put your hand up and said you were interested in doing something the opportunities were there.”

Curtis moved on – she became an Executive Producer/Director, graduated to the position of Commissioning Executive and was later appointed Deputy Director of Programmes. She oversaw RTE’s digital switchover. “While I was doing that I was responsible for the digital strategy.” And then she left the station. It was that simple: “I left in August 2013. I loved working in RTÉ, but I just wanted to see what else was out there.”

“I’d no plan but I’d worked all my life,” says the mother-of-three, who thinks she’d simply reached a stage where she wondered whether that was all there was. “A lot of people were going – ‘you’re nuts’, and ‘why are you doing it?’ but I just wanted to see what else was out there for me.”

Her husband Jim Duggan was, she says, “highly supportive,” which made it easier. “You adjust to your lifestyle changes and you survive on one salary, Jim just said ‘do what you have to do’.”

Then came the phone call in February 2014. UTV’s human resources department rang out of the blue, and, after some to-ing and fro-ing, Curtis signed on for what was to be a big start-up operation. “We hired the full team – 100 in Dublin and 10 in the regions”. The newsroom had to be established and the studio and offices had to be built. “My responsibility was to manage the strategic direction of the channel. I have overall responsibility for all news and programming content,” she says, adding that she also commissions some home-produced programmes.

“You have to be aware of the competitive landscape and what the other channels are doing, and a big aspect every morning is looking at who watched us and who watched others. A lot of what we do is driven by audience demographics – people love the soaps!”

The UTV Ireland news team is strong she says, but it takes a while for the message to get out there: “Our news is very strong editorially but people are creatures of habit and it takes time to embed it into the general public’s mind.” She adds, “we have fantastic anchors and a fantastic team of journalists and we have to walk before we can run.”

The Most Senior Woman In TV

She jibs a bit at being called the most senior woman in Irish TV – one of the most senior women in Irish TV would be more appropriate she feels, acknowledging however, that at the higher levels TV is still very male-dominated. “There are a lot of woman at Executive Producer or Commissioning Executive level and it’s changing,” though she points out, this trend is not necessarily confined to broadcasting.

“I think Sheryl Sandberg [Facebook’s COO] has made some very valid points,” she says, adding that some people don’t necessarily put their hands up when the time is right. “Some people – male or female – will pause their career for family or personal reasons, but for me this didn’t affect my career.”

“This is an individual’s choice, so whether you’re a man or woman you have to make the right choice for you and you have to ask ‘Do I really want the job’ and ‘why am I applying for it?’”

So what was her secret? Well, she ponders, she really liked TV and she was genuinely curious about how it worked. “I’d finish in one area and I’d like to see how commissioning works or how strategy works.

And she’s calm. And these days, calm is good. “I am a very calm person, I think I’ve learned to be empathetic. As you grow older you become more tolerant.”

This leads to her sense of confidence: “I know I’ll be on top of my game, I know my stuff and know what I’m doing.” She enjoys working with people and as the eldest of nine children, “you can throw anything at me and it will not phase me!”

A quick browse of the award winning Kai...