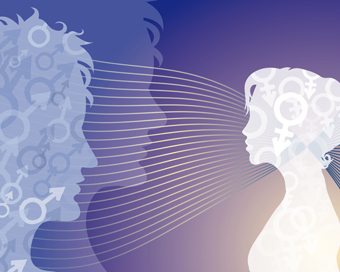 Have you found yourself waiting in a meeting for just the right moment to jump in with an idea or a suggestion? You have thought through the idea and although it’s a different approach, it’s a valid proposal. Yet there’s something holding you back. Maybe they will think your idea is mediocre and dismiss it.

Or perhaps you’re waiting for the current speaker to finish, but before you know it your male colleague jumps in, or worse you’re interrupted mid-sentence. “Your time” never seems to come and you leave the meeting frustrated and unheard. Does this sound familiar? You’re not alone.

According to a 2012 study led by scholars at Birmingham Young University and Princeton, when women were outnumbered by men, they spoke 75% less compared to their male colleagues. Given that the majority of our organisations today are still male-dominated, what impact does a less vocal workforce have and how do we ensure that women get just as much airtime as men? Do our workplace cultures encourage women to feel confident enough to seize those moments of opportunity to share their ideas, and more importantly, that women are heard when they do speak?

Why the female voice is important

One might ask why this matters anyway; if women want to be heard, they should simply surrender to the dominating culture of shouting the loudest. This view is too simplistic and is detrimental to our workplaces. Yes there are increasingly more women at the table, but why invite them if we don’t listen to what they have to say.

In the ever competitive world in which we live and work, innovation and ideas are what will differentiate the organisations that will lead from the laggards. Ensuring we capture the ideas of the full workforce doesn’t just mean we shape our products and services to be more reflective of our societies and communities, we also increase the pool and variety of ideas we have to select from and thereby our chances of success. According to 49% of respondents to Deloitte’s 2013 International Women’s Day survey, innovation and idea generation are the most significant advantages of gender diversity. A more representative and diverse workforce is what we need, but if we fail to address the barriers that prevent some women from being more vocal at work, we won’t realise the true benefits.

A quiet and sometimes ignored female talent pool also speaks volumes when we consider the impact it has on the next generation of female leaders. Although millennials are generally more comfortable expressing their opinions than previous generations, will female millennials in the workplace face the same challenges, which drive women today to hold back?

In her ‘Who Takes the Floor and Why’ research paper, Victoria Brescoll of Yale University presents the results of studying the impact of volubility (the total amount of time spent talking) on power for both men and women.

1. While there was a strong correlation between volubility and power for male senators, the correlation was less significant for their female peers.

2. Women who held positions of power did not talk much more than their less senior colleagues, whereas men with power showed higher volubility.

3. Finally, women were more likely to see a backlash with increased volubility.

The third finding is critical to understanding why the female voice is less audible in today’s workplaces. Sheryl Sandberg and Adam Grant wrote an article earlier this year in the New York Times about this double-bind women face; speak up and you’re disliked, keep quiet and you’re labelled as lacking confidence. Men are also deemed more competent by 10% if they speak up, while women are deemed less competent by 14% and less loyal if speaking up comes in the form of challenge.

Surely the alternative of striving for success quietly is more appealing. The truth is that the alternative is a longer and less likely route to success. So we speak – but what tends to happen when we do?

In a study led by Hancock and Rubin of George Washington University, men interrupted women 30% more times than they interrupted their male colleagues. This supports research by Catherine Krupnick, which found that once female students were interrupted by male peers, they tended to remain silent for the rest of the class. This is damaging; not just at the individual level, but at an organisational level where we risk excluding ideas even before they are fully formed.

Jessica Bennet of Time Magazine has recently named this as “manterrupting” – being interrupted by a man. It’s not necessarily intentional or consciously done hence Bennet’s suggestion that raising awareness of such manifestations of unconscious bias is a key part of the solution.

But what’s worse: being interrupted mid-sentence or being given the airtime to complete your piece and then being ignored?

We’re confident enough to express our ideas and we’re given the airtime we need. Have others really listened and taken on board our ideas or concerns? Unfortunately, not always.

Sandberg and Grant also refer to Professor Ethan Burris’s work at the University of Texas, which provides evidence around how women tend to be ignored more than their male peers. Suggestions are seen to be challenges rather than helpful when made by women, therefore can sometimes be ignored.

It would be wrong to think this was all about ‘manterrupting’. Women were just as bad, if not worse, than men when it came to interrupting women. The same George Washington University study found that women interrupted other women three times more than they interrupted men. How do we, starting today, make sure we are listened to so our business cases, our ideas and our concerns are heard?

1. Do your homework: No one can be 100% certain of the outcome of a proposal or the chances of success of a new project, but doing your homework before presenting your ideas can boost your confidence.

2. Own your voice: Think more about the language you use to have the greatest impact in meetings (“Women, Find Your Voice” in Harvard Business Review). Men do this well by using active words and authoritative statements, taking ownership of their opinions and building on the ideas of others. This isn’t to say that you adopt all male behaviours in meetings, but language is fundamental to how you communicate your ideas.

3. Vocalise your support: When asked by HBR what they would do to change how men include women in meetings, 38% of the senior women said that they would ask men to involve women more in meetings by asking direct questions. We should all take note. Could you be more proactive in supporting other women at meetings? Even just acknowledging someone else’s contribution may seem simple, but to the individual having at least one other supporter can make a big difference.

Building a diverse talent pool but only developing the ideas of a few is simply not enough. We all deserve to be heard, and each one of us has a role to play.

Fears: Face Them Now And...

According to the InterTradeIreland Business...