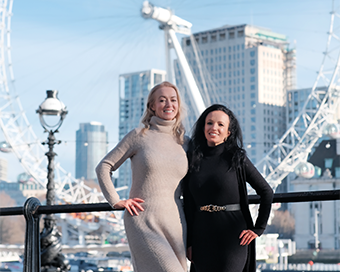 Limerick-based founders, sisters Jacqui and Perry Meskell are celebrating after being selected one of 12 start-ups out of 122 to be finalists of the London-based programme ‘Hotbed Overrules’. The programme provides high potential female-founded start-ups from over 35 countries with mentoring and support. Huggnote, which grew 1000% during the most recent 10-week programme, will now go forward to ‘speed-date’ multiple investors at the programme’s culmination event this month.

“We’re absolutely thrilled to be finalists of Hotbed Overrules. As a female focused programme, the calibre of start-ups was extremely high so it’s great validation of our hard work and Huggnote’s growing popularity worldwide,” said founder and CEO Jacqui Meskell.

In 2022 Huggnote was a finalist at Hotbed’s accelerator for both male and female founded early-stage start-ups from the UK and Ireland – at which it won both audience awards for ‘Best Pitch’ and ‘Product Most Likely to Use’ at the demo-day in May. Both programmes are run by seasoned UK entrepreneurship experts Perdie Adler and Margaret Anne Coyle who were impressed with Huggnote’s success.

“We created Hotbed to give start-ups, no matter where they’re based an equal chance of scaling and securing investment and we love Huggnote’s product,” admitted Perdie.

“Jacqui and Perry are the perfect team to run it and they’ve shown incredible traction and growth, which is why we selected them to pitch at our Demo Day this year,” acknowledged Margaret.

Multi award-winning Huggnote, which was recently announced one of Ireland’s ‘Top 100 Most Ambitious Companies’ by Spark Crowdfunding, originated as a user-need when a friend of the entrepreneurial duo was going through a tough time while away and they couldn’t be there to give her a hug. Then a song on the radio brought back such happy memories they realised that it was the perfect solution. “I heard the song and thought that if only there was a way to ‘digitally gift-wrap’ and send it to her, it would say everything words couldn’t,” said Jacqui. “And so that is what Huggnote does. We use music as the most powerful language on the planet to express any sentiment from ‘I Love You’ to ‘I’m Sorry’.

Huggnote is a web app, which means there’s nothing to download – but can be accessed simply from the website www.huggnote.com where users can login, select a theme, choose the song they want and send along with a personal message. The recipient receives an alert they’ve been ‘hugged’ which they can instantly access whether they’ve signed up or not.  The  app is so impactful that users are often moved to tears by their HUGG and the founders believe Huggnote is resonating because it is so unique.

“Obviously, nothing compares to a physical hug but that’s not always possible, so our main goal is to offer people an alternative in the social media arena, whereby rather than share your fake self with fake friends, with Huggnote you express your most authentic or even vulnerable self – with those you love the most,” said Jacqui.

Huggnote has certainly struck a chord, growing 2000% year-on-year with hundreds of thousands of users across the globe. The company is also getting attention from some big players – and is the only Irish company to be awarded the Mozilla Builders Award for companies with the potential to fix the internet and US TV Pitch Comp Show ‘Two Minute Drill’ on which the start-up won $50k in cash and prizes.

The company is now gearing up for a busy Q1 in 2023 with a ‘peak’ event happening each month, including National Hugging Day (this month); Valentine’s Day in February and St Patrick’s Day in March. “All those occasions where people feel that need to spontaneously express how they feel are really busy for us,” said Jacqui. “But that said – our most popular theme is ‘I Love You’ and of course ‘Happy Birthday’ and we’re happy to say that’s consistent right across the year.”

Nora Khaldi, the Founder and CEO of...