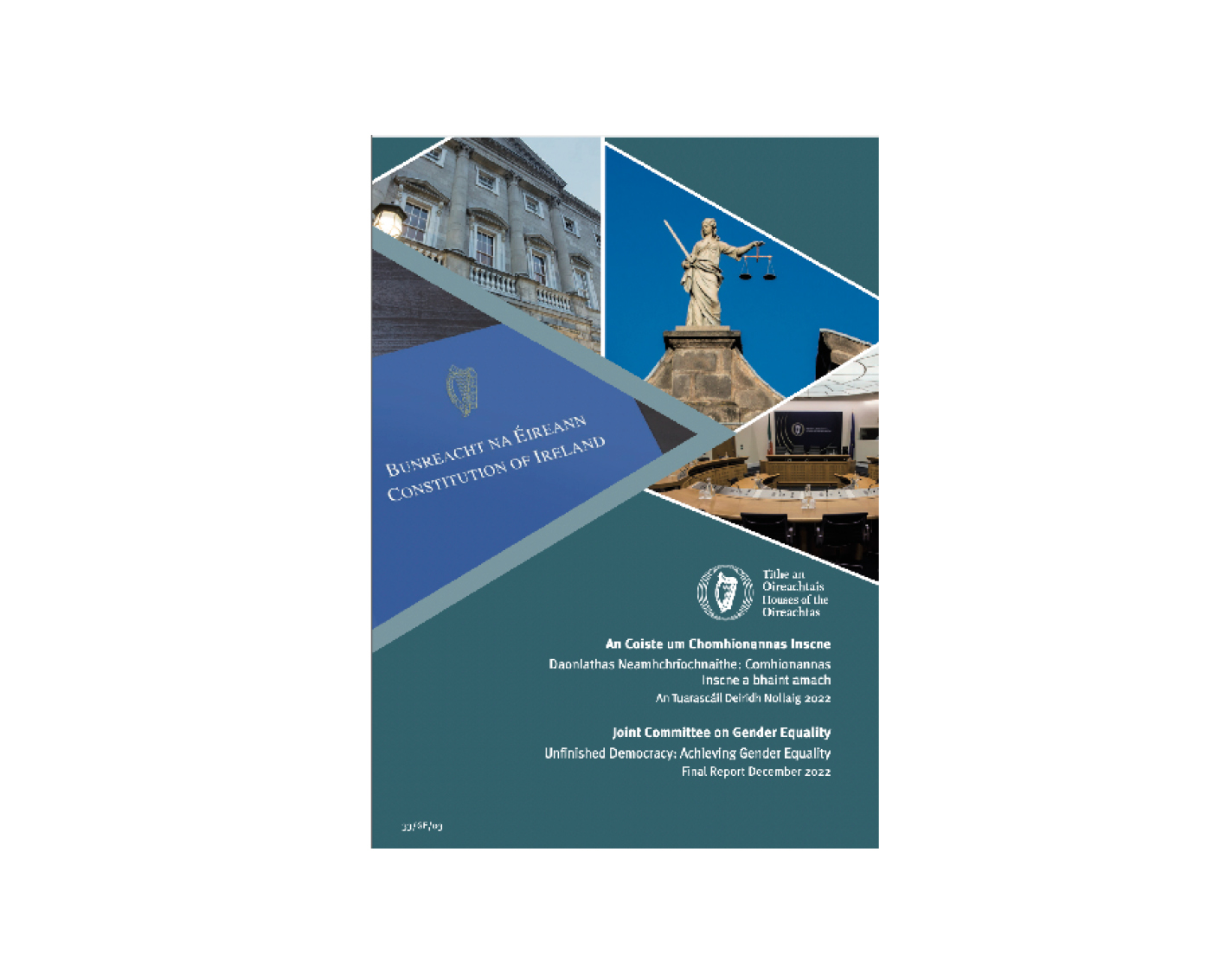 This report is based on the work carried out by the Oireachtas Committee over 2022.

Chaired by Ivana Bacik TD, the cross-party Committee held a range of hearings to consider the comprehensive recommendations produced by the Citizens’ Assembly on Gender Equality.

The Committee took the view that the 45 Assembly recommendations should be seen as a blueprint for achieving a gender equal Ireland, and so the focus of its deliberations was on how best to secure their implementation.

In particular, the Committee has developed a precise wording of the text for amending Articles 40.1 and 41 of the Constitution, and it calls on the Government to hold the necessary referendum in 2023.

The proposed changes to Article 40.1 would reflect the Assembly’s wish to see constitutional recognition for the principle of gender equality; and for principles of equality and non-discrimination.

The proposed changes to Article 41 would remove the sexist language currently in the text referring exclusively to women and mothers as having a ‘life’ and ‘duties’ within the home.

Instead, the proposed changes would insert gender-neutral language to ensure that the role of care is recognised, valued and supported by the State.

The proposed changes would also ensure a more inclusive definition of ‘family’ beyond the family based upon marriage.

Apart from constitutional change, the report also sets out comprehensive recommendations on a range of other gender equality measures; on childcare, care and social protection; on measures to address Domestic, Sexual and Gender Based Violence (DSGBV); on the role that education can play in challenging gendered norms and stereotypes; on the impact of pay and workplace conditions on gender equality; on how to achieve gender equality in leadership, politics and public life; and on how the gender equality principle can be protected through law and policy.

Speaking at the launch of the report, Committee Cathaoirleach Deputy Ivana Bacik expressed thanks to all who had engaged with the work of the Committee, saying:

“The aim of this report is to provide an action plan for change towards a truly gender equal Ireland, with meaningful timelines for implementation.

“In particular, we want to see a referendum held in 2023 to give effect to Assembly recommendations 1-3 on constitutional change; and we call on the Government to begin the preparatory work necessary for the holding of such a referendum.”

“We look forward to the implementation of our recommendations, and to the achievement of a truly gender equal society.

As the Assembly has stated, ‘gender equality is a matter of human rights, justice, and fairness. It must underpin all of our interactions as a society.”

“Until gender equality is achieved, our democracy will remain unfinished.”

Some of the key recommendations for government action in the report:

•Hold a constitutional referendum in 2023 to give effect to the Citizens’ Assembly recommendations on constitutional change, on the basis of the wording proposed by the Committee.
• Commission a ‘cost of care’ review that calculates the financial cost of unpaid care and examines the societal value of unpaid care.
• Move from a model of privatised care provision towards a publicly funded, accessible and regulated model of quality, affordable early years education and childcare.
• Ensure that the State takes over full responsibility for the remuneration of employees in the early years and childcare sector.
• Develop and establish a National Planning Unit for Care, to foster better linkages and co-ordination on care policies across all relevant Government Departments.
• Establish a Statutory Child Maintenance Agency to keep child maintenance out of the courts where possible.
• Ensure that action on the Third National Strategy on DSGBV begins immediately, pending the establishment of the new Statutory National Agency.
• Reinstate the Irish Sentencing Information System and ensure improved data systems within the criminal justice system to provide visibility on sentencing levels in DSGBV cases.
• Mandate the Electoral Commission to review a national gender quota strategy every five years.
• Initiate a process towards the introduction of a universal pension system.
• Institute a more generalised pilot Universal Basic Income (UBI) scheme based on the ‘participation income’ approach.

You can read the Report and full recommendations here>>