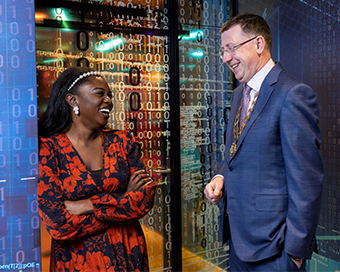 Chartered Accountants Ireland has today launched an Ethnicity Network Group to develop a more inclusive profession by helping organisations to foster a culture of equity, inclusion and belonging for employees from minority ethnic groups. The Institute represents over 31,500 members working in business, in practice and the public sector on the island of Ireland and in over 100 countries.

The Ethnicity Network Group will include a programme of events; the provision of training and resources for organisations; and the development of a mentoring programme to support members and students from Traveller, Black, Asian and other Minority Ethnic groups. In establishing this initiative, the profession wants to encourage and facilitate the discussion of issues relevant to people in these minority groups and give them the voice and platform to identify solutions.

This comes as a survey of over 1,300 members and students of Chartered Accountants Ireland conducted by Coyne Research showed that over 40% (2 in 5) of members who claim to have witnessed/heard discrimination against others report it was based on ethnicity. 2 in 3 students reported the same. Accordingly, among both members and students, ethnicity was cited as the primary area that the Institute could place greater priority on, and over half of members and 60% of students surveyed would be interested in attending associated training or supports if offered by the Institute.

“Our organisation must be representative of those we educate, regulate, represent, and engage with, and indeed our membership should be reflective of the society we operate in and the public interest we act in support of.

“Supporting greater inclusion and belonging among minority ethnic groups in our profession makes sense on so many levels. First and foremost, it is the right things to do as a membership and student body and as an employer. In addition, however, by committing to the creation of a more diverse, inclusive, and supportive body it ensures that we are positioned to attract a wealth of talent into the profession, talent that places a premium on choosing an environment which values diversity and inclusion.”

“With this network we will aim to expand the conversation around diversity, to further strengthen the cultural intelligence within our profession and beyond, and to continually challenge biases in the highest and best way. I’m immensely proud of where we are today and look forward to seeing what we can create together.”

Some Resistance to Getting...