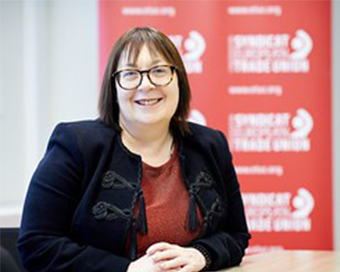 ICTU General Secretary, Owen Reidy, has warmly congratulated Esther Lynch following the announcement at a meeting of the ETUC Executive Committee in Brussels earlier today and said “now more than ever, we need strong voices speaking on behalf of and protecting the rights of European workers in EU decision-making. He added: “I wish Esther well as she takes on her new responsibilities and assures her of ICTU’s full support.”

Esther Lynch was elected as ETUC Deputy General Secretary at the Vienna Congress in May 2019, after four years as Confederal Secretary. She has extensive trade union experience at Irish, European, and international levels, starting with her election as a shop steward in the 1980s. Before coming to the ETUC, she was the Legislation and Social Affairs Officer with the Irish Congress of Trade Unions (ICTU), where she took part in negotiations on Ireland’s National Social Partner Agreements. Esther’s responsibilities include social dialogue, collective bargaining and wage policy, trade union rights, gender equality, and Brexit.

The ETUC is the voice of workers and represents 45 million members from 93 trade union organisations in 41 European countries, plus 10 European Trade Union Federations. The European Trade Union Confederation speaks with a single voice on behalf of European workers to have a stronger say in EU decision-making.

The European Commission has announced that...