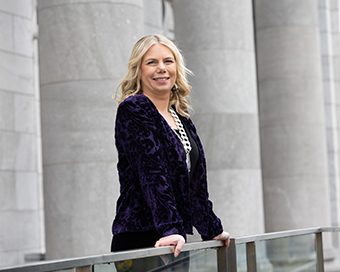 Speaking about her appointment, Ingrid paid tribute to the outgoing President and her fellow committee members for their efforts throughout the year:

She said: “I am honoured to be elected President of Network Ireland Cork, the largest Network Ireland branch in the country. Thank you to Maria for her commitment and dedication during the past 12 months. 2022 was the year we all got back to in-person events after two years in the online world and Maria so confidently led the organisation back into the wider business, civic and academic community in Cork.”

“The variety and vibrancy of the in-person events she hosted and the collaborations she developed throughout this year is something I want to continue to build on. 2023 marks the 40th anniversary of Network Ireland, and we are looking forward to a year of local and national celebrations.”

“We are lucky to have a group of dedicated volunteers on our committee, without whom Network Ireland Cork would simply not exist. I look forward to working with them over the coming year to further strengthen the organisation in Cork, and to continue being a source of development and growth for our members,” she concluded.

Ingrid, originally from Norway, moved to Ireland in the mid-90’s and has resided in Cork since 2013 with her family in Frankfield.

Following a 20-year corporate career ranging from IBM to Amazon, she founded her own business – Avenues Consultancy and Coaching – where she currently works with individuals and organisations in both the public and private sector as a coach and leadership consultant, with a particular focus on female and organisational leadership.

She also has a Master’s degree in Coaching and Positive Psychology from University College Cork and has developed several courses on the topics of leadership, wellbeing, resilience and work-life balance and is a regular writer and lecturer on these topics.

Ingrid was a member of Network Cork’s voluntary committee since 2020, initially coming on board as the branch secretary for two years before she was announced Vice President of Network Ireland Cork in 2022. She is a former 2021 winner of Network Cork’s Businesswoman of the Year Awards.

New Principal Officers also appointed for the 2023 committee include Susana Marambio as Vice President and Lynda McAuliffe as Secretary.

Network Ireland’s Cork branch is the largest of their groups across Ireland – with close to 200 members. The organisation celebrates their 40th anniversary this year and Ingrid said the organisation looked forward to “a year of local and national celebrations,” adding that new branch members for 2023 are always welcome.