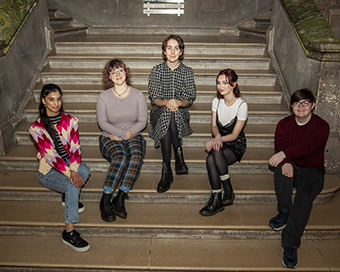 The five awardees, all first-year students at Trinity, are:

They are the first recipients of a total of 25 Three Ireland Connect to STEM scholarships for women to be awarded at Trinity over the next five years.

Administered by the Faculty of STEM and Trinity Access and worth €20,000 each over a four-year undergraduate degree programme, the scholarship scheme aims to attract women from Ireland to study STEM subjects at Trinity.

By working in partnership with Three Ireland, we can create a more diverse student population studying STEM undergraduate degree programmes and create the conditions for greater innovation and diversity in the workplace.

Applications were invited from first year students on selected courses in 2022/3 and recipients were chosen on the basis of a written application.

The successful students will also receive mentoring and other supports from Three Ireland.

Dr Linda Doyle, Provost, Trinity College Dublin, said: “I want to warmly congratulate the five recipients of the “Connect to STEM” scholarships and wish them every success in their studies. As an engineering graduate myself, I know how hugely rewarding it is to engage with STEM subjects.

“I also want to thank Three Ireland; this is a fantastic initiative to encourage more diverse participation in STEM.

“In order to understand and challenge power in today’s world, an understanding of STEM is vital. And it is hugely important that we have many women studying and working in this sphere.”

Elaine Carey, Chief Commercial Officer, Three Ireland and Three UK said: “As a large employer in the STEM sector, at Three we know we have an important role to play in ensuring the talent pool is as diverse as possible. Our partnership with Trinity is supporting these efforts and I am delighted that the first five very-worthy scholars have been chosen. I would like to wish them every success in their studies over the next four years and I look forward to continuing our partnership with Trinity and future scholars as well as the teachers appointed as part of Three’s Trinity Access Teacher Fellowships”.

Paula Cogan, CEO at Cognate Health, has been...