Women in the Workplace A Report by McKinsey & LeanIn.Org 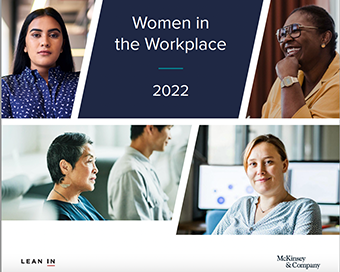 Women leaders are switching jobs at the highest rates we’ve ever seen, and ambitious young women are prepared to do the same. To make meaningful and sustainable progress toward gender equality, companies need to go beyond table stakes. That’s according to the latest Women in the Workplace report from McKinsey, in partnership with LeanIn.Org.

This is the eighth year of the Women in the Workplace report. Conducted in partnership with LeanIn.Org, this effort is the largest study of women in corporate America. This year, information was collected from 333 participating organizations employing more than 12 million people, surveyed more than 40,000 employees, and conducted interviews with women of diverse identities—including women of color, LGBTQ+ women, and women with disabilities—to get an intersectional look at biases and barriers.

This research revealed that we’re amid a “Great Breakup.”

Women are demanding more from work, and they’re leaving their companies in unprecedented numbers to get it. Women leaders are switching jobs at the highest rates we’ve ever seen—and at higher rates than men in leadership. That could have serious implications for companies. Women are already significantly underrepresented in leadership.

For years, fewer women have risen through the ranks because of the “broken rung” at the first step up to management.

Now, companies are struggling to hold onto the relatively few women leaders they have. And all of these dynamics are even more pronounced for women of color.

The reasons women leaders are stepping away from their companies are telling. Women leaders are just as ambitious as men, but at many companies, they face headwinds that signal it will be harder to advance. They’re more likely to experience belittling microaggressions, such as having their judgment questioned or being mistaken for someone more junior. They’re doing more to support employee well-being and foster inclusion, but this critical work is spreading them thin and going mostly unrewarded. And finally,

it’s increasingly important to women leaders that they work for companies that prioritize flexibility, employee well-being, and diversity, equity, and inclusion (DEI).

If companies don’t take action, they risk losing not only their current women leaders but also the next generation of women leaders. Young women are even more ambitious and place a higher premium on working in an equitable, supportive, and inclusive workplace. They’re watching senior women leave for better opportunities, and they’re prepared to do the same.

Despite modest gains in representation over the last eight years, women—and especially women of color—are still dramatically underrepresented in corporate America. And this is especially true in senior leadership: only one in four C-suite leaders is a woman, and only one in 20 is a woman of color 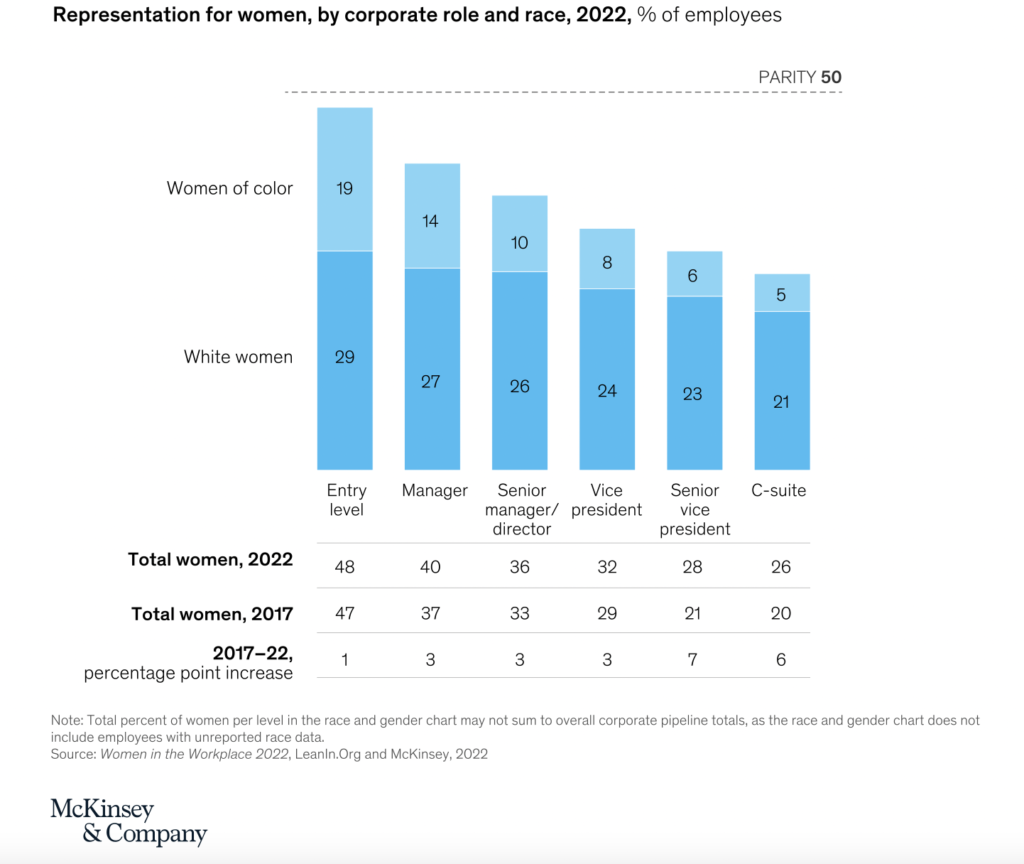 Moreover, most companies are grappling with two pipeline problems that make achieving gender equality in their organizations all but impossible:

1. The ‘broken rung’ remains unfixed. For the eighth consecutive year, a broken rung at the first step up to manager is holding women back. For every 100 men who are promoted from entry-level roles to manager positions, only 87 women are promoted, and only 82 women of color are promoted. As a result, men significantly outnumber women at the manager level, and women can never catch up. There are simply too few women to promote to senior leadership positions.

Women leaders are demanding more from their companies, and they’re increasingly willing to switch jobs to get it.

Two years after the pandemic forced corporate America into a massive experiment with flexible work, enthusiasm for flexibility in all its forms is higher than ever.

A vast majority of employees want to work for companies that offer remote- or hybrid-work options. Only 7 percent of companies plan to pull back on remote and hybrid work in the next year, and 32 percent say these options are likely to expand.

As companies continue to navigate this transition, there are three key things they should consider.

Choice is critical. Women employees who can choose to work in the arrangement they prefer—whether remote or on-site—are less burned out, happier in their jobs, and much less likely to consider leaving their companies.

The option to work remotely is especially important to women. Only one in ten women wants to work mostly on-site, and many women point to remote- and hybrid-work options as one of their top reasons for joining or staying with an organization. These preferences are about more than flexibility.

Although remote and hybrid work are delivering real benefits, they may also be creating new challenges. A majority of companies are concerned that employees who work remotely feel less connected to their teams and say that remote and hybrid work are placing additional demands on managers. It’s also possible that employees who work primarily from home—who are more likely to be women—will get fewer opportunities for recognition and advancement.

You can download the full report from McKinsey here>>