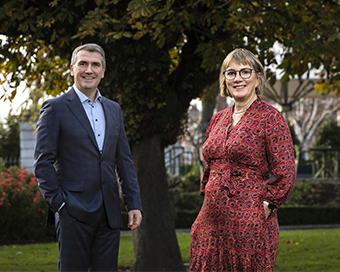 The fifth annual report of the Balance for Better Business Review Group, published today, reveals that Irish businesses have made significant progress in achieving gender balance at Board level over the past year.

The report was launched by Tánaiste and Minister for Enterprise, Trade and Employment Leo Varadkar TD and the Balance for Better Business Co-Chairs Julie Sinnamon and Aongus Hegarty.

Commenting on the findings of the report, Tánaiste and Minister for Enterprise, Trade and Employment Leo Varadkar TD said: “As we look back over the past year, it’s encouraging to see the progress that continues to be made on gender balance across the Irish business landscape.

I’m especially pleased to see that Ireland has now not only caught up with, but exceeded, the EU average for the representation of women on the largest listed companies’ boards.

This marks a significant accomplishment, especially given that this has occurred over a relatively short time period.”

The report by the Government established initiative shows that in 2022,

For other listed companies, the percentage of women on Boards is now 26%, exceeding the 22% target set for the end of 2022 and up 16 percentage points since 2018.

Encouragingly, ISEQ20  Boards have also continued to move beyond a “one and done” approach to adding women to their Boards, with almost three quarters of ISEQ20 listed companies now having three or more female Board members.

While the other listed cohort has a lower number of Boards with three or more women, at 28%, this represents a significant increase from 10.7% in 2019. In addition, the overall percentage of companies listed on the ISEQ overall, with more than three women on their Board has exceeded 50% for the first time – at 51%.

This progress over the past year is reflected in the fact that, for the first time, Ireland has exceeded the EU27 average for the proportion of women on leading company Boards by 1.6 percentage points. The gap between Ireland and the rest of the EU has narrowed every year since Balance for Better Business was established in 2018.

Tánaiste and Minister for Enterprise, Trade and Employment Leo Varadkar TD added: “Despite the progress, it’s clear that more work needs to be done.

Women are still underrepresented in senior roles both at Board and senior leadership level, with just one female Chair on the ISEQ20 and only a small number of female CEOs on publicly listed companies.

By failing to include women in leadership teams, businesses ignore the talent of half the population. While change takes time, it’s crucial that businesses redouble their efforts in 2023 to create more opportunities for women to succeed to the highest levels of Irish business.”

While there have been significant gains over the past year, the report also reveals slower progress in some areas, particularly when it comes to the number of women in senior leadership roles. Although the ISEQ20 companies exceeded their 2022 target for female representation at senior leadership level, reaching 27% against a target of 26%, other listed companies have missed their 22% target for the year. Meanwhile, the report shows that women hold just four out of 36 CEO positions in publicly listed companies.

Balance for Better Business co-chair Julie Sinnamon said: “Since its launch in 2018, Balance for Better Business has worked not only to promote gender balance at Board and executive leadership levels, but also to share the experience of organisations on the journey towards achieving gender balance. Those efforts to date are reflected in the progress that has been made across the past year in terms of gender balance at Board level, notwithstanding the fact that work remains to be done to ensure that women are able to progress into the most senior positions on Board and leadership teams.

“At Balance for Better Business, we’ll continue to support businesses as they look to bridge these gaps.

By highlighting the ways in which proactive talent management and succession planning provide robust pathways for women to succeed to more senior roles, our aim is to help foster the deeper behavioural and cultural transformation required to drive real change across Irish organisations.”

“While the progress made this year among businesses is to be welcomed, there are still too many companies with all male boards and leadership teams in Ireland.

This is despite the compelling business case of having an equal number of men and women in senior leadership positions including greater levels of innovation, enhanced financial returns and stronger Environmental, Social and Government (ESG) performance.

“With the aim of inspiring action at senior leadership level, this year’s report highlights three key recommendations for improving gender balance at board and leadership level. These include setting stretch targets and building an action plan to achieve them, fostering a gender balanced succession plan and pipeline of female talent, and mandating gender balanced candidate lists for open roles. Through these specific actions, we want to empower leaders to build a culture that promotes gender balance while also reaping the many benefits of diverse and inclusive leadership.”

The 30% Club Ireland has welcomed the Balance for Better Business Review Group’s fifth report, where targets of 30% for women on all public listed boards have been exceeded for the first time, and now stand at 32%.

While the Government-established Balance for Better Business initiative shows that the overall trends at board level are positive, concern remains around progress at senior leadership level – including in particular CEO, CFO and Chair roles.

Meliosa O’Caoimh, Chair 30% Club Ireland commented: “It’s fantastic that after just five years of this initiative we are seeing such strides forward in female board representation. This year in particular marks several ‘firsts’ and this is to be commended and celebrated.

However, progress is not happening at the same pace in other spheres – particularly at C-suite – where women are still significantly under under-represented in many large companies here.”

“It is critical that we continue with work in this area to address this gap, because in addition to providing an important pipeline for board talent, it is imperative that we have gender balance at all senior decision-making levels within organisations.

The 30% Club also welcomes the upcoming disclosures in relation to gender pay, where the data will highlight the importance of addressing inequal representation in senior and higher paid roles as critical to reducing the gender pay gap across Irish business.

The 30% Club Ireland’s Board Connections initiative – to connect highly qualified women interested in board roles with those responsible for improving gender balance in board appointments for listed, private and State bodies across Ireland – continues to have impact as commitment to board diversity extends beyond listed companies and across State and private organisations.

Board Connections at the 30% Club was established last year, as the new home for the model founded in 2009 by the Board Diversity Initiative. It involves a directory comprising the profiles of  senior women in business across Ireland, who are interested in taking on a board role.  The directory is made available on request to Board Chairs, CEOs and search firms involved in the selection process for board roles.

Commenting on Board Connections, Gillian Harford, Country Executive for the 30% Club said: “Many Irish companies have made significant progress on board gender balance through voluntary actions since we started this chapter of the 30% Club in 2015, but there is always more to be done.

There is simply no excuse, in 2022, for not having women on boards because we know that the the talent is there, and through this directory we can connect accomplished women with boards where their presence makes a difference”.

Welcoming the latest report from the Balance for Better Business group, Caroline Spillane CDir, Chief Executive Officer of the Institute of Directors in Ireland, commented:

“The findings in the latest Balance for Better Business report are encouraging, especially the fact that Ireland has now caught up with and exceeded the EU average for the representation of women on the largest listed companies’ boards. Research conducted by IoD Ireland indicates that just over half (51%) of our members have a diversity policy/statement in place and 59% have a board composition policy. Such policies are key enablers for a diverse and inclusive board and organisation.”