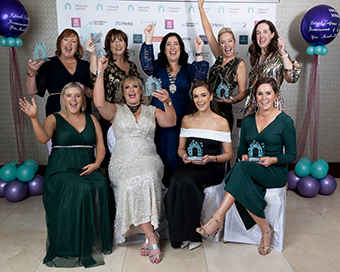 The creator of a weighted pillow designed to reduce people’s dependence on sleep medication, a business that helps improve efficiency in GP practices and the co-founder of a game changing technology which automates video analytics for sports are among the winners of Network Ireland’s Businesswoman of the Year Awards.

The results were announced during the business organisation’s annual Conference and Businesswoman of the Year Awards at Galway’s Salthill Hotel on Friday, October 7th with Enterprise Ireland as the official partner for the event.

A 300-strong audience attended the gala event which was hosted by Irish broadcaster and writer Mary Kennedy.

The winners of the eight categories are:

Established Businesswoman – Sandra Looney, To Have and To Hold

This year’s ‘Trisha Murphy Memorial Award for Outstanding Contribution’ was conferred on Siobhan Carroll from ACT for Meningitis and Dr Suzanne McClean from Rosabel’s Rooms. The Galway women set up national charities following the unexpected loss of their daughters. ACT for Meningitis provides free support services to anyone affected by meningitis in Ireland. It also works to save lives through greater awareness of the disease. Rosabel’s Rooms works in partnership with the Irish Hospice Foundation and provides direct financial and therapeutic support to families around Ireland, who lose a child from stillbirth to 21 years of age.

National President Noreen McKenzie, paid tribute to Siobhan, Suzanne and all the winners, she said: “Siobhan and Suzanne have been a huge source of inspiration to me and to Network Ireland members across the country. Their charities provide vital support to families going through the toughest times imaginable. They are truly worthy winners of the Trisha Murphy Memorial Award.

“I would like to congratulate all our winners, finalists and entrants. It takes courage and belief to put yourself out there to be judged and it is not easy. I had the pleasure of meeting so many entrants at the local branch awards and at the national interviews. Their resilience, tenacity and passion is uplifting and I’m looking forward to seeing their plans for their future businesses and careers coming to fruition.

AIB is the official partner for Network Ireland which was established in 1983. The Network has almost 1,200 members across fourteen branches around Ireland. Each year they organise up to 200 events for members.

The Kind, Kinda Smashed It!