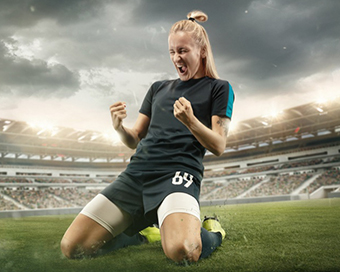 There’s been a dramatic increase in the number of ‘sporty’ girls who are dreaming about reaching the top in sport after being inspired by the historic Lionesses’ win.

A survey of over 2,500 children and young people aged 13-24 commissioned by the UK charity Women in Sport with the support of Sports Direct, showed that nearly

70% of girls who love playing sport dream of reaching the top, almost levelling with sporty boys at 75%. This is up from 50% of girls, in the same category, two years ago.

The overall picture however is less positive. Whilst the success of the Lionesses and the increasing profile of women’s sport has done much to release the hopes of a generation of sporty girls, the survey found that a huge gender gap remains when it comes to participation in enjoyable sport and activity in the first place.

Half as many girls (21%) as boys (39%) say that they do lots of sport and activity. 17% more girls than boys say they love sport but lack the opportunity to play.

As a result of this, the survey showed that overall a serious dream deficit remains with 31% of girls versus 53% of boys dreaming of reaching the top of sport.

Girls are surrounded by discouraging messages that tell them society doesn’t value women’s sport. 4 in 10 girls feel women’s sport is still viewed as of lower value than men’s sport and that girls are not expected to be good at sport.

However, attitudes are beginning to shift. More boys, particularly teenage boys, are starting to recognise the injustice within sport and are keen to see women’s sport flourish.

Boys are also more aware that women’s sport is taken less seriously, and that a funding gap exists.

Girls would also like to see increased gender parity in sport.

Around 7 in 10 girls think equal media coverage is especially important.

They’d also like to see increasing support for women’s and girls’ sports teams (58%), more celebration of women’s achievements (54%), higher profile for a wider diversity of female athletes and professional players and for the gender pay gap to be eradicated.

Despite the perception of negative attitudes towards women’s sport there is a huge group of girls (67%) who would like to do more sport but lack the opportunities or encouragement and have started to participate less. There is now an opportunity to engage more girls in sport and exercise before they are lost to a lifetime of in activity.

Women in Sport CEO Stephanie Hilborne OBE said: “The Lionesses success was a unifying moment for the country and it is great to have data to show the positive impact the growing profile of women’s sport has had on the children and young people who watched. Both boys and girls have been inspired by the passion, talent and positive team dynamic on display but the biggest impact has been on sporty girls and young women.

Suddenly girls who love sport and play a lot of it, can dream in the way boys have always been able to.

It is fantastic to see this and to find out that many more boys now recognise the injustice of treating women as second-class citizens in sport.

“Women’s sport has taken a huge stride forward this summer. But there is still a lot more to do to unpick centuries of female exclusion from sport.  We must not allow the momentum to slow. Far too many girls who would like to play are missing out on the joy of sport due to deep-rooted negative attitudes, fear of judgement and lack of opportunity. We need to work towards long-lasting change. Girls must be allowed to play, to feel that their sport matters, because it is wrong to deny them the dreams and all the personal and physical benefits sport brings.”

Women in Sport is calling for:

•Sports organisations to provide the right opportunities for teenage girls, making sport more relevant to them. The charity has published ‘8’ principles for success. 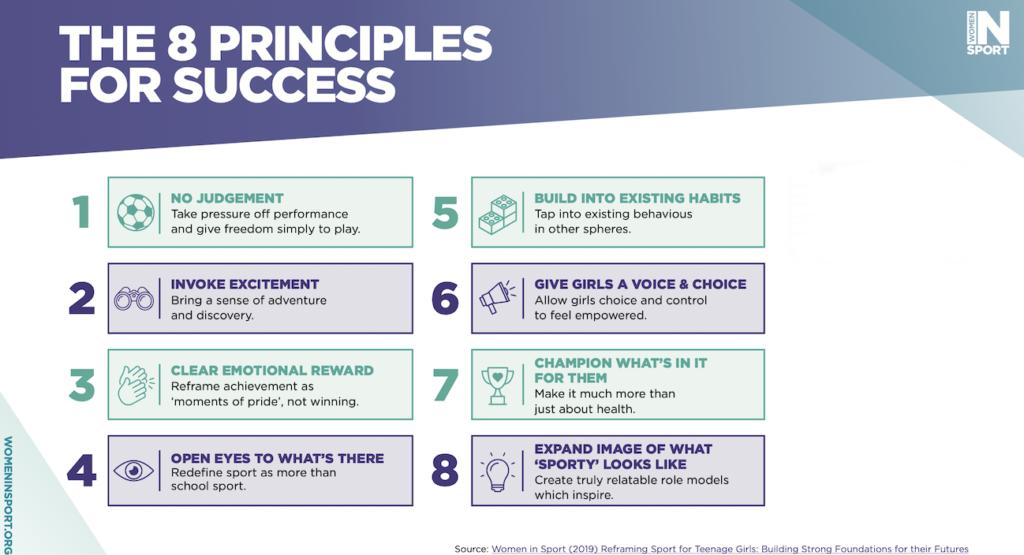 •Advice and support to be provided to teenage girls to help them to continue sport and exercise during puberty. The big Sister project, run by Women in Sport and a consortium of partners, provides teenage girls with practical and emotional support to navigate decisions over sports bras and periods and improve self-belief and wellbeing.

The charity is also working with brands to improve gender equality, such as Sports Direct’s Equal Pay campaign. Beckie Stanion, Chief Marketing Officer at Sports Direct, commented: “Working with Women in Sport to analyse the current state of grassroots girls’ sport in the UK has demonstrated just how many girls still see the playing field as uneven. With Equal Play, we’re hoping to inspire the next generation of female ballers by creating a level playing field between men’s and women’s sport.”