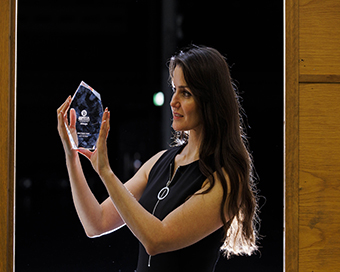 Nora Khaldi, the Founder and CEO of Dublin-based Nuritas, was honoured with the Grace Hopper Award at the Diversity In Tech Awards held in Dublin’s RDS Concert Hall last night (21st September, 2022).

She was among 17 recipients at the glitzy ceremony, which shone a light on individuals and organisations striving to create a more diverse and inclusive workplace. Attracting entries from more than 170 companies across Ireland, Europe, the United Arab Emirates and the United States, the Diversity in Tech Awards went live for the first time this year. They were powered by Catalyst Media, with JP Morgan as the main event partner.

Khaldi’s passion for pure mathematics, biology and science led her to create Nuritas in 2014. Throughout her career, her ambition has been to disrupt the status quo in areas that have been void of technology by introducing new ways of thinking, big data, and new algorithms. She has led international research teams around the world, in both academic and industrial settings, and has a proven record in new molecule discovery and commercialisation.

Accepting the Grace Hopper Award, Nora Khaldi said: “I am extremely grateful for this award, it is a true testament to the work we do and the continued innovations we seek to unlock with my team at Nuritas, a team that finds strength in our diversity. I grew up with a diverse background; my educational skill sets were built at the interaction of diverse fields of science and mathematics that usually don’t come together. I’ve instilled this diversity in Nuritas from the very start and

I truly believe that the way forward is when diverse ideas, diverse people, and diverse educational backgrounds come together to create something beautiful.”

The Open Doors Initiative, led by CEO Jeanne McDonagh, was also singled out for special recognition, in the form of the Diversity Impact Award. The not-for-profit organisation works with Government departments to create pathways to education, employment and entrepreneurship for marginalised people. At the ceremony, the Open Doors team was congratulated for demonstrating exceptional initiative to promote diversity in the workplace. 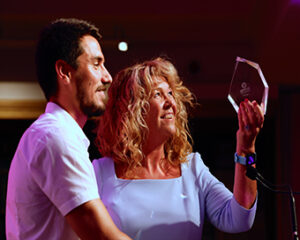 Our passion is seeing people from all walks of life overcome barriers and challenges, progress and find their calling.

It is an honour for us that they trust us with this task and one which we are very grateful for. We look forward to helping even more on these pathways in the coming years, with the invaluable help of our corporate partners and supporting NGOs.”

Among the other winners on the night were Dublin’s Cognizant, named Diverse Company of the Year, Sidero’s Carmel Owens who picked up the Diversity Role Model Award, Oracle for the LGBTQ+ Inclusion Award, and Kildare’s Access Earth who took the Social Impact Award. The Disability Inclusion Award went to Brian Dalton from Fiserv, the Cultural Inclusion Award to eBay, and the Health & Wellness Award to Axonista.