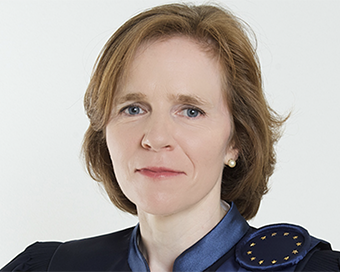 Justice O’Leary is the first female President of the European Court of Human Rights and succeeds Robert Spano (Iceland).

The Minister for Foreign Affairs, Simon Coveney, has welcomed the election and said:

“Judge O’Leary has served with great distinction since her appointment to the Court, and her election as President is a mark of the high regard in which she is held. It is a source of pride that the first female President of the Court should be an Irish judge.

“The Court is central to the protection of human rights, fundamental freedoms, and the rule of law in Europe. Never have these ideals and principles been more important.”

Justice O’Leary was born in Dublin and educated at University College Dublin (BCL) and the European University Institute Florence (PhD). Prior to her appointment to the Court, Judge O’Leary held a number of academic positions, and was a référendaire and chef de cabinet at the Court of Justice of the European Union.

Justice O’Leary has been a judge of the European Court of Human Rights (‘the Court’) since 2 July 2015 and has served as Vice-President of the Court since 2 January 2022.

The Court is responsible for ensuring the observance by the contracting parties of their obligations under the European Convention on Human Rights and its Protocols. The President is elected by the plenary Court by secret ballot for a period of 3 years. The procedure for the election of President is provided for under the Rules of Court.

Ireland assumed the rotating Presidency of the Committee of Ministers of the Council of Europe on 20 May 2022, a position it holds until November.

Justice O’Leary will take up office on 1 November 2022.

The Joint Committee on Gender Equality will...