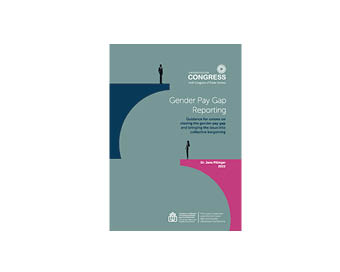 “Despite decades of treaties and conventions internationally, EU and national legislation and commitments from employers and, if we are honest, ourselves in the trade union movement also, we still have a stubbornly high gender pay gap of 11.3% (Eurostat data for 2019, based on average gross hourly earnings) in Ireland,” said Patricia King, General Secretary ICTU in the forward of “Gender Pay Gap Reporting: Guidance for unions on closing the gender pay gap and bringing the issue into collective bargaining”.  The guide was launched yesterday at the Irish Human Rights and Equality Commission.

According to Eurostat data the EU gender pay gap has closed by 1% over the last eight years. Based on these trends women will be waiting for another 84 years to achieve equal pay.

Speaking at the launch of the ICTU guide, Minister for Children, Equality, Disability, Integration, and Youth, Roderic O’Gorman, T.D. stated: “I welcome the launch of the ‘Trade Union Guide to Gender Pay Gap Audits’, to build on the reporting requirements provided for in legislation.

I encourage its uptake by Unions as it has the potential to positively impact on the success of gender pay gap reporting and achieving real change to gender equality in the workplace.

I commend the Irish Congress of Trade Unions for developing this important guidance and the Irish Human Rights and Equality Commission for funding the project.”

Consultant and author of the guide, Dr. Jane Pillinger, added: “Gender pay gap reporting is an important milestone in the fight against unfair and unequal pay, particularly for women workers in low paid and undervalued jobs.

Trade unions have a vital role to play in finding solutions with employers and bringing unequal pay and it’s root causes into collective bargaining. The guidance is aimed at building union strategies and actions on gender pay gap reporting and the wider structural causes of unequal pay”.

ICTU recommends that unions commence negotiations with employers to ensure that there is a comprehensive implementation of the regulations, and that this is an opportunity to go beyond what is in the regulations and address many of the structural or other causes of the gender pay gap. This is important because the regulations do not specify that either unions should be consulted or that employers draw up and publish action plans to implement the findings of gender pay gap reporting.

Congress President, Kevin Callinan, concluded: “Congress has been calling for gender pay gap reporting legislation for many years and believes that potentially it’s a mechanism to encourage employers into tangible action to bridge the gap. It is also an opportunity for unions to negotiate actions to address pay inequality and we will be seeking engagement with employers when the first set of audit reports are published in December, in order to agree a set of measures to be taken by the employer to eliminate or reduce any gaps identified.”

You can link to the Guide here>>

Sculpted by Aimee is the first ever Irish...

The UK Economy is Losing...

A new report released by The...