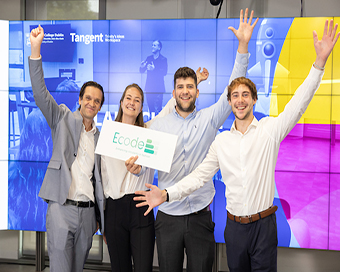 The announcement came after 10 teams of student entrepreneurs sought capital investment from venture capitalists and angel investors last Friday as part of LaunchBox 2022. The final, known as Demo Day, saw the shortlisted teams pitch their companies to seek support to accelerate their start-ups. A myriad of industries were represented by the young entrepreneurs on the day, from esports and circular fashion to quantum computing.

LaunchBox, sponsored by Bank of Ireland, and managed by Tangent, Trinity’s Ideas Workspace, provides students with mentorship, funding, access to alumni and investors, and a collaborative environment to launch new ventures.

Following an application period which saw overwhelming interest, 10 teams collectively representing nine Trinity schools were selected to partake in the programme, the oldest of its kind in Ireland.

Many Launchbox programme alumni have developed viable businesses across a wide range of sectors. Since 2013, the student ventures involved have created approximately 300 jobs and raised over €100 million in investment and funding. Alumni companies include social enterprise Foodcloud, which helps businesses redistribute surplus food to those who need it, Touchtech Payments, a payment processing venture that was acquired by Stripe in 2019, and Equine MediRecord, which digitises the medical records of the multi-billion-euro horse racing industry’s equine stars and has recently received an investment of €10M.

Tangent CEO Ken Finnegan said: “At Tangent, Trinity’s Ideas Workspace, we emphasise the importance of agility and innovation in all of our courses and programmes, and it has never been more necessary and important than in the current climate. Both the LaunchBox programme and the LaunchBox startups have demonstrated unparalleled flexibility and innovation in the move to a fully online programme and are a testament to the culture of creativity and adaptability here in Trinity.”

The Cost of Doing Business...