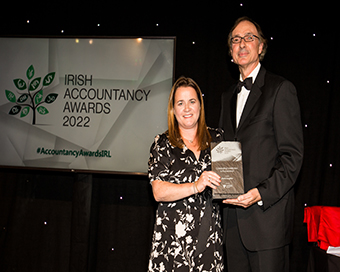 Elaine Coughlan, one of Ireland’s most successful technology investors and co-founder of Atlantic Bridge, the global growth technology fund, has been recognised for her contribution to the accountancy profession at an awards ceremony in Dublin.

A chartered accountant by trade, Elaine gained experience working with the first wave of technology entrepreneurs in Ireland that were accessing US capital markets in the early 1990s, spending time working in Silicon Valley before co-founding Atlantic Bridge in 2004. Over the next 20 years, Atlantic Bridge built over €1 billion of assets under management across eight funds, investing in technology companies.

Making the presentation at the 5th annual Irish Accountancy Awards, the Chief Executive of Chartered Accountants Ireland acknowledged Ms Coughlan’s commitment to and passion for supporting start-ups and the advancement of Ireland as a leading hub for technology development.

Barry Dempsey said; “Elaine represents the very best of the accountancy profession, demonstrating over many years her considerable ability and an unwavering commitment to, and faith, in the potential of the Irish entrepreneurial spirit.

She has also, throughout her career to date, been a vocal supporter of female-led companies and entrepreneurs, blazing a trail in her own achievements, but proving generous in her determination to help others to succeed.

“This award joins many other accolades awarded to her, but it is a real privilege to present it on behalf of Chartered Accountants Ireland. For the current and next generation of chartered accountants, this individual is a shining example of what this career path can offer.”

Accepting the award, Elaine Coughlan said; “It was my accountancy and audit experience that led me into the technology industry, and it was my experience as an accountant working alongside some of Ireland’s great entrepreneurs that gave me the foundation and confidence to take that jump to co found Atlantic Bridge in 2004. I’m very proud of my accountancy background and I am confident that many more graduates will recognise it as a super route into lots of career paths including in companies, then onto investment, and the venture capital business.

“We are entering a new investment cycle where rising inflation, interest rates, and risk of recession mean that investors are increasingly risk averse. However just as the government held firm in 2010 on investment in R&D,

we need to hold our nerve in continuing to invest in the best and brightest people and start-ups in Ireland that will drive the next generation of growth.”

The Outstanding Contribution category recognises an individual whose work demonstrates a sustained commitment to the advancement of the profession. It recognises the exceptional abilities and achievements of the individual, as well as their commitment to their organisations, teams, and industry overall.

Credit Suisse Group has announced the...

Minister for Further and Higher Education,...