Protecting Against Growing Risk of Cyber-Attacks

A large majority of Irish businesses are taking action to insulate against the rising threat of cybercrime globally, targeting internal processes and staff training, according to new research gathered for the Grant Thornton Ireland International Business Report.

The research found that 62% of businesses surveyed plan to upgrade technical controls over the coming 12 months to mitigate risk in response to increasing global attacks. Over a third of businesses also indicated they are implementing robust training plans to prepare staff for potential attacks. 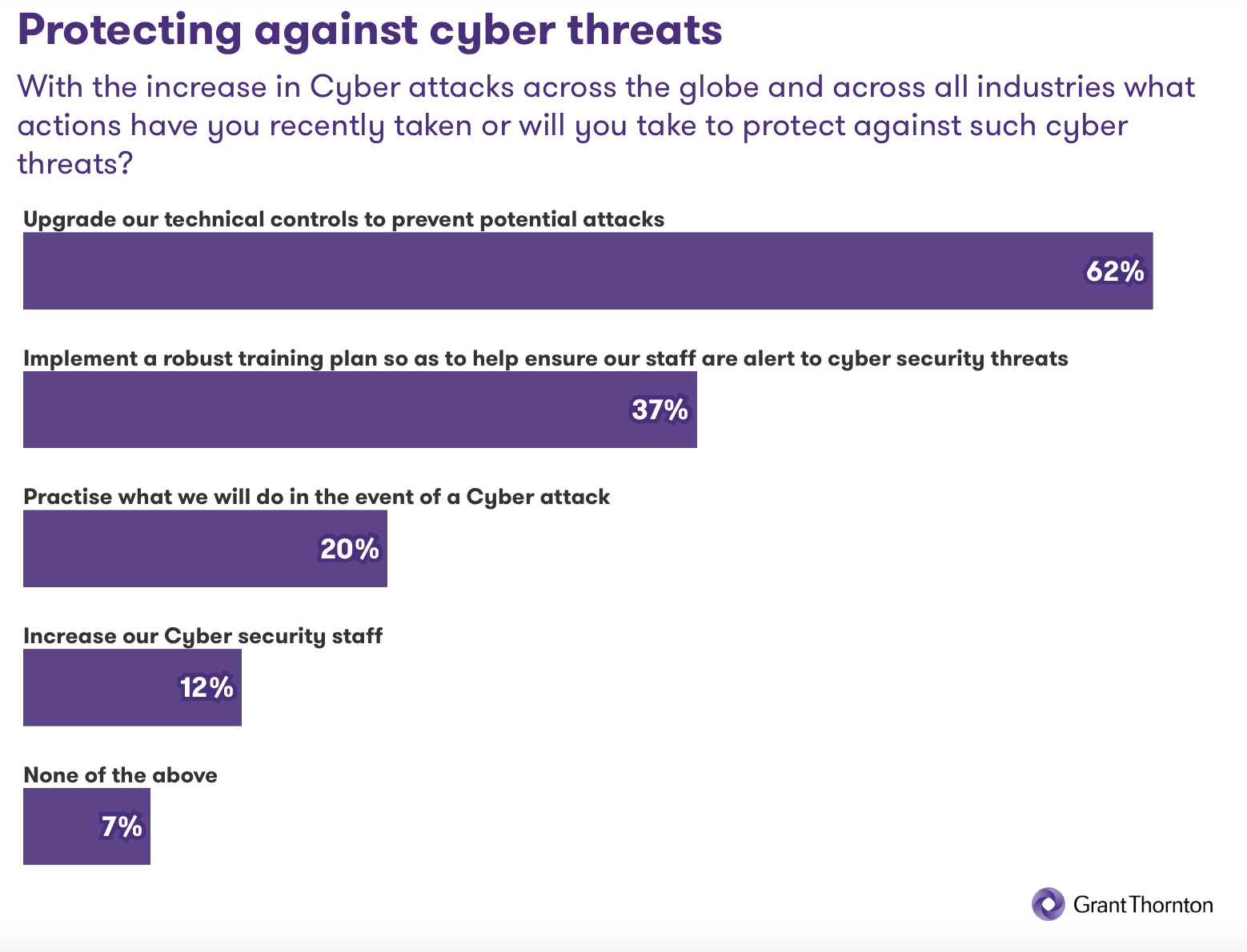 Half of the businesses plan to invest in technology to boost internal cyber protection processes while 20% have prepared plans for how they will respond in the event of such an attack. The Grant Thornton International Business Report is a survey of 29 economies globally, including Ireland, carried out in the first half of the year.

The Grant Thornton Cost of Cybercrime report 2021 previously revealed an estimated cost of €9.6bn to the Irish economy as a result of bad actors targeting Irish businesses, consumers and state/government agencies. It represented a significant increase in just eight years since the first Cost of Cybercrime report was published in 2014 when €630 million was the estimated cost of cybercrime to the Irish economy.

Speaking of the findings, Partner and Head of Cyber Security Services at Grant Thornton Ireland Mike Harris said, ‘We’re seeing growing anxieties around the risk of cyber-attacks to Irish businesses coming through in the International Business Report findings, and it’s no surprise either when we see the volume of attacks growing year-on-year.

‘The financial and reputational damage a cyber attack causes to a business and its people cannot be underestimated, and it’s reassuring to see businesses are acting now to prevent and mitigate against that risk. Staff training and efficient and upgraded IT infrastructure are going a long way to support this.

‘While Ransomware has been seen as the major threat in the last year and has been the clear focus of Irish organisations, other issues such as cloud security and digital supply chain security will increasingly command focus.’

Cyber security is forming a significant part in businesses upgrading their digital infrastructure and IT investments as 43.5% of businesses report IT security management their main investment in this area to support future growth of their business. Online orders and payments processes ranks second with 23% of businesses investing in this area, while some 21% are investing in data management and analysis such as AI and advanced analytics.

The current Grant Thornton International Business Report also found that businesses sense of optimism for the coming 12 months has dropped since the previous report, with 62% of businesses reportedly optimistic, down from 85% in 2021.