It will take Another 132 Years to Close the Gender Gap! 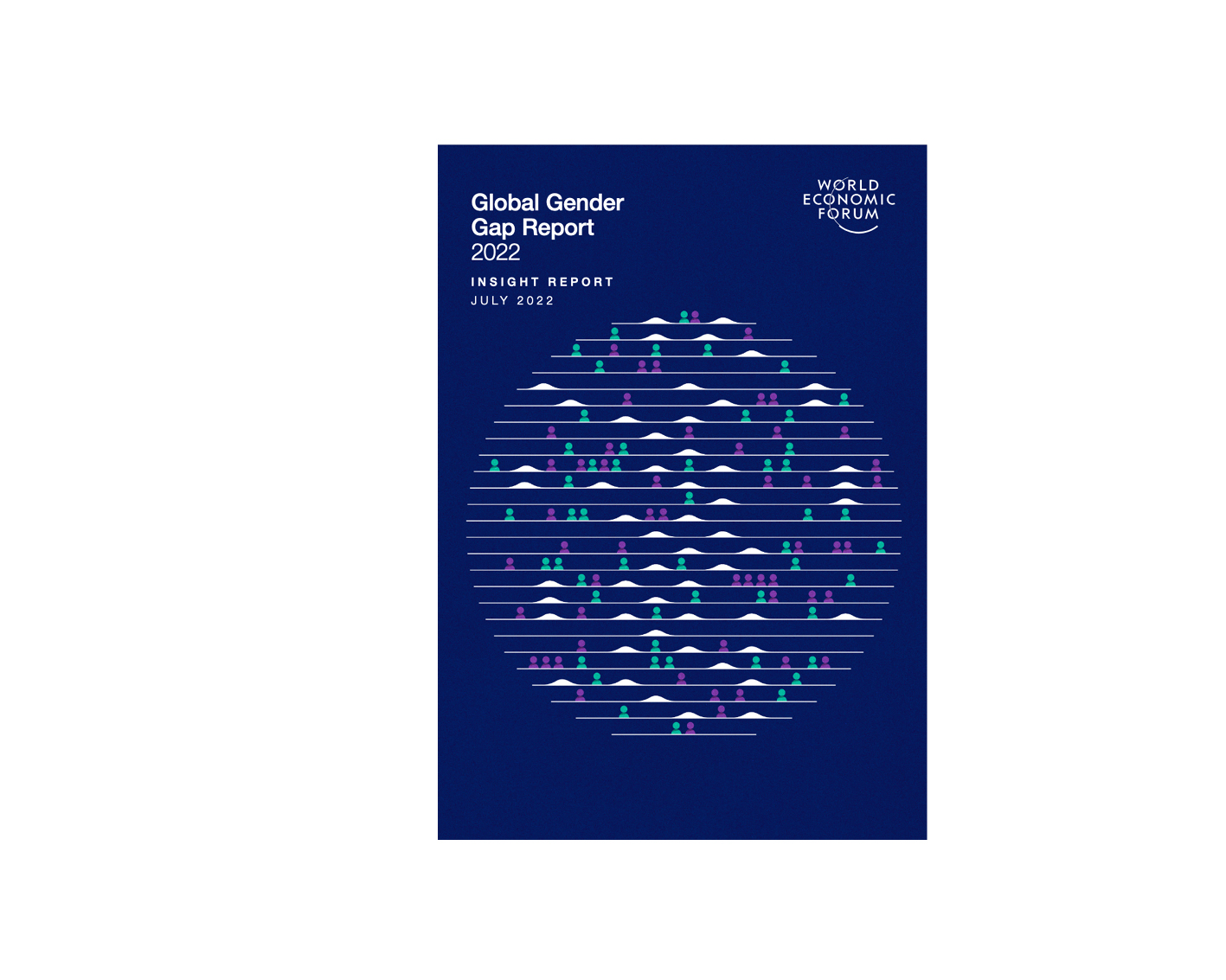 After a big COVID hit, the gender gap hasn’t bounced back, according to the World Economic Forum’s Global Gender Gap Report 2022.

As the global economy enters its third year of continued disruption, it will take another 132 years (compared to 136 in 2021) to close the gender gap.

The report suggests that of the 146 economies surveyed, just one in five has managed to close the gender gap by at least 1% in the past year. As a result, while gains have been made in the past year, they have reduced the time it will take to reach gender parity by only four years. This progress does little to offset the setback of an entire generation recorded in 2020-2021 at the start of the pandemic.

“The cost of living crisis is impacting women disproportionately after the shock of labour market losses during the pandemic and the continued inadequacy of care infrastructure.

In face of a weak recovery, government and business must make two sets of efforts: targeted policies to support women’s return to the workforce and women’s talent development in the industries of the future. Otherwise, we risk eroding the gains of the last decades permanently and losing out on the future economic returns of diversity,” says Saadia Zahidi, Managing Director at the World Economic Forum.

The Global Gender Gap Report, now in its 16th year, benchmarks the evolution of gender-based gaps in four areas: economic participation and opportunity; educational attainment; health and survival; and political empowerment. It also explores the impact of recent global shocks on the growing gender gap crisis in the labour market.

Across the 146 countries covered in 2022, the health and survival gender gap has closed by 95.8%, educational attainment by 94.4%, economic participation and opportunity by 60.3% and political empowerment by 22%. Between 2021 and 2022, the economic participation and opportunity sub-index increased by 1.6%, based mainly on gains for women in professional and technical roles and a decrease in the wage gap, even as gender gaps in the labour force increased. For the health and survival sub-index, there was a small improvement from 95.7% to 95.8%, while the educational attainment sub-index fell from 95.2% to 94.4% and political empowerment stalled at 22%.

Taking a longer view over 16 years, at the current rates of progress it will take 155 years to close the political empowerment gender gap – 11 more than predicted in 2021 – and 151 years for the economic participation and opportunity gender gap.

Although 29 countries have reached full parity, it will still take 22 years to close the educational attainment gender gap. And while more than 140 countries have closed at least 95% of their health gaps, overall backsliding in health and survival means there may be a reversal.

For the 13th consecutive year, Iceland is the most gender-equal country in the world and the only one to have closed more than 90% of the gender gap.

Of the Top 10 countries, Ireland sits in 9th position in the global ranking with a gender gap score of 80.4% and 5th in regional (Europe) ranking.

Ireland is one of six countries in the ‘Top 10’ that did not report significant changes in their overall gender gap score or rank between 2021 and 2022. However, Ireland does recover ground lost since posting its highest score in 2016 (at 80.6%). The Health and Survival subindex reports no changes. On the Political Empowerment subindex, Ireland’s score remains similar to last year, maintaining the country’s upwards progress. 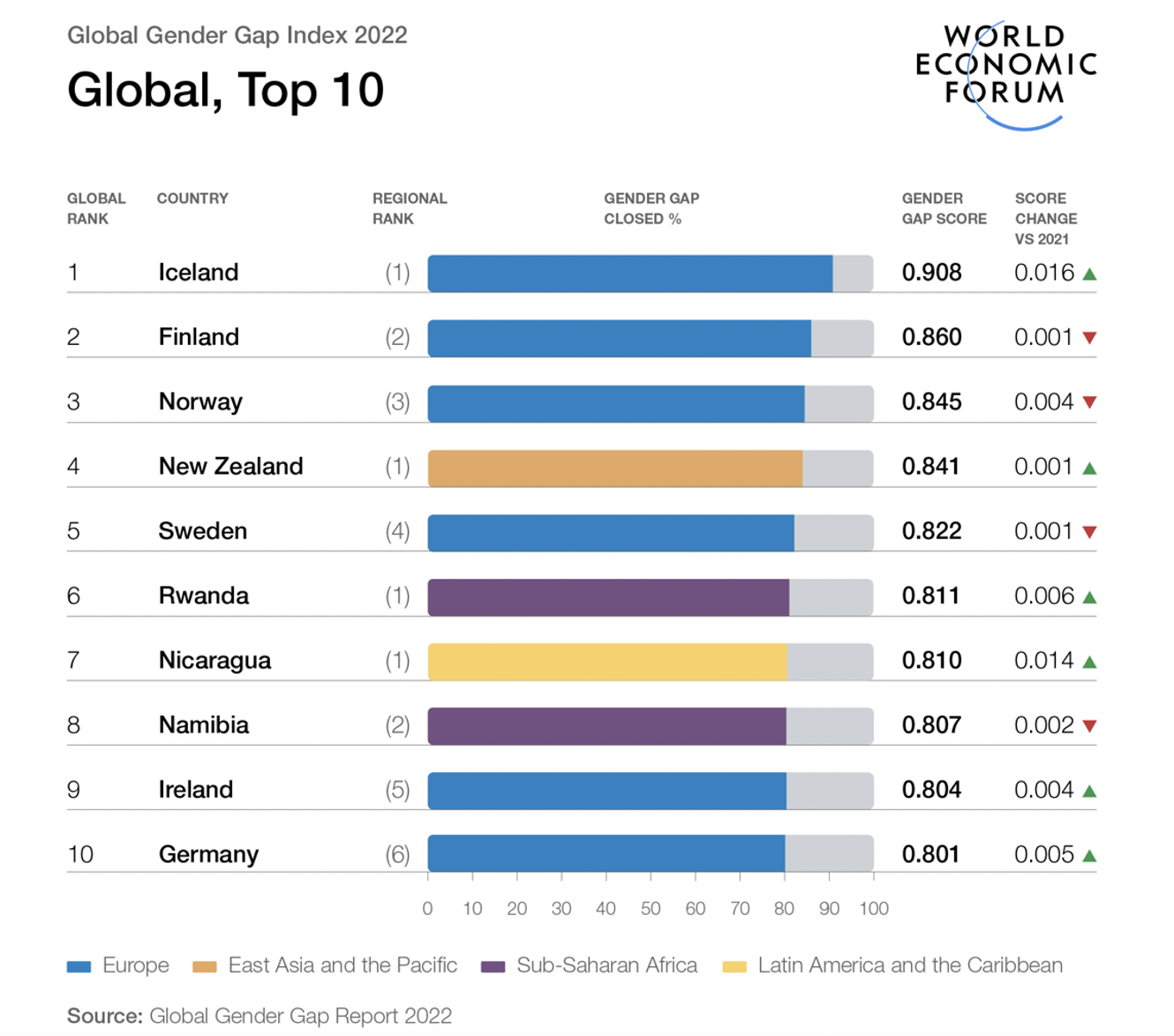 North America is the best performing region, with 76.9% of its gender gap closed. The number of years it will take to close the gap has fallen from 62 to 59. There is slight improvement in the United States, while Canada’s score does not evolve.

Europe (76.6%) is close behind, clocking an improvement of 0.2% since 2021, resulting in a 60-year wait until the gender gap is closed. Six of the top 10 countries are European and nine of the 35 countries in the region have improved their score by at least 1%. Albania, Iceland and Luxembourg are the region’s three most improved countries.

Latin America and the Caribbean (72.6%) ranks third regionally, improving 0.4% points since the previous edition. Based on the current pace of progress, Latin America and the Caribbean will close the gap in 67 years. However, within the region only six of the 22 countries indexed in this edition improved their gender gap score by at least one percentage point, suggesting increasing regional divergence.

Central Asia (69.1%) has stalled in its progress, with a score unchanged from 2021. At this pace, it will take 151 years to close the regional gender gap. Six of the 10 countries in the region have seen an improvement in their scores, with Moldova, Belarus and Georgia representing the top-ranked countries.

East Asia and the Pacific (69%) saw 13 of the 19 countries in the region make progress since the last edition. But at its current pace, the region will need 168 years to close the gender gap. Progress is taking place at different speeds between countries, risking further regional divergence. The region’s top performers are New Zealand (84.1%), Philippines (78.3%) and Australia (73.8%).

Sub-Saharan Africa (68.7%) has registered its best score, with an improvement of 1.1% in the past year, reflecting positive changes in the economic gender gap in countries such as Nigeria, Ethiopia, Democratic Republic of the Congo and Kenya. At the current rate, it will take 98 years to close the gender gap.

Middle East and North Africa (63.4%) has the second-largest gender gap yet to close, with Israel, United Arab Emirates and Lebanon the highest performing countries. Some progress was made in closing the economic gender gap (+2%), with a number of countries improving women’s labour force participation and the share of women in technical roles. The region’s score remains similar to the last edition, which gives a timeframe of 115 years to close the gap.

South Asia (62.3%) has the largest gender gap of all regions, with low scores across all measured gender gaps and little progress made in most countries since the last edition. At its current pace, it will take 197 years to close the gender gap in the region. The economic gender gap has closed by 1.8%, with increases in the share of women in professional and technical roles in countries including Bangladesh and India, as well as Nepal.

Gender gaps in the workforce: a looming crisis

Global gender parity for labour force participation had been slowly declining since 2009 in the Global Gender Gap Index. The trend, however, was exacerbated in 2020, when gender parity scores decreased precipitously over two consecutive editions. As a result,

in 2022, gender parity in the labour force stands at 62.9%, the lowest level registered since the index was first compiled.

The majority of care work fell on women as childcare facilities and schools were closed. Even before the pandemic, men’s share of time in unpaid work as a proportion spent in total work was 19%, while for women this was 55%.

This overall progress, however, masks differences in industries. Among the industries that hired the highest share of women into leadership positions in 2021 are non-governmental and membership organizations (54%), education (49%), government and public sector (46%), personal services and well-being (46%), healthcare and care services (46%), and media and communications (46%). In contrast, six industries hired significantly more men than women into leadership positions in 2021: Technology (30%), agriculture (28%), energy (25%), supply chain and transportation (25%), manufacturing (22%) and infrastructure (21%).

Finally, learning is also segmented by gender, changing the composition of talent available with future-ready skills. In higher education globally, women continue to be overrepresented in education and health and welfare degree subjects compared to men and underrepresented in STEM fields.

There are nearly four times as many men as women graduates in information and communication technologies (ICT) and in engineering and manufacturing.

High-frequency data from Coursera suggests that gender gaps are smaller in online enrolment. In ICT, for example, gender parity increased in online training between 2019 and 2021 during an overall rise in online learning. The Report also contains new metrics on wealth and on health from data collaborations with WTW and Hologic.

Closing gender gaps remains a critical driver of national prosperity. Countries that invest in all of their human capital and make it easier for their populations to balance work and family life tend to be more prosperous.

With an increasingly uncertain economic outlook, the Global Gender Gap Report 2022 calls on more leaders to unleash the creativity and dynamism of their countries’ human capital to overcome the current crises and accelerate a strong recovery.

The Closing the Gender Gap Accelerators work with government and business in advanced and developing economies to create structed public-private collaborations for rapid acceleration to economic parity, focusing on increasing women’s participation in the workforce, closing the gender pay gap and helping more women advance into leadership roles and develop in-demand skills. The model has been adopted in 12 economies, with Ecuador, Kazakhstan, Japan and Mexico joining the accelerator network in 2021-2022.

England’s Lionesses made history at the...