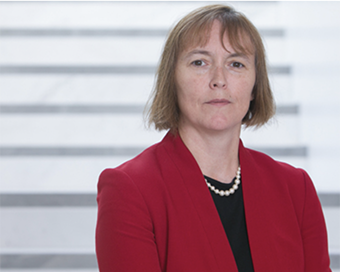 The Central Bank has announced that, with the consent of the Minister for Finance, the Commission has appointed Sharon Donnery to the role of Deputy Governor (Financial Regulation) with effect from 1 July.

Sharon will become a member of the ECB’s Supervisory Board which has responsibility for directly supervising the largest banking groups in the euro area. She spent the last six years as Deputy Governor leading the Bank’s Economics and Statistics, Financial Stability and Financial Operations Directorates and working as the Governor’s Alternate on the ECB Governing Council.

Her new role responsibilities include that of Deputy Governor (Prudential Regulation) and include additional responsibilities to strengthen the Bank’s input into the development of domestic and international financial regulatory policy and lead on the Bank’s strategic priority to transform the Bank’s approach to supervision and regulation.

The position of Deputy Governor (Central Banking) is being renamed as Deputy Governor (Monetary and Financial Stability), with Director Economics and Statistics Mark Cassidy appointed on an acting basis to the role pending the outcome of an open competition. Robert Kelly, currently Head of the Bank’s Macro-Financial Division has been appointed to act in Mark’s place.

The job title of Deputy Governor (Consumer and Investor Protection) replaces Director General Financial Conduct. The change in title reflects the importance of consumer and investor protection at the heart of the Bank’s mission and strategy.

Speaking about the appointment, Governor Makhlouf said: “We have an ambitious Strategy which represents a renewal and repositioning for the Central Bank. Our Strategy aims to ensure that our direction and ambitions over the next five years are responsive and forward looking. I am delighted Sharon has agreed to take on a new set of Deputy Governor responsibilities and I look forward to working with her, and the rest of the senior team on the delivery of the strategy.”

Presidio, a global digital services and...

The National Women’s Council (NWC) is...