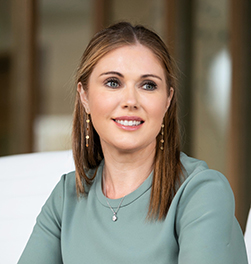 Presidio, a global digital services and solutions provider, with operations in Ireland, has announced the appointment of Bríd Graham as Senior Vice President (SVP) of Presidio Europe and APAC. This latest appointment will see Bríd assume overall leadership for the Presidio business that operates out of its Dublin based operation, where it currently employs over 300 people.

In her new role as Senior Vice President at Presidio, Bríd will be responsible for building Presidio’s offering to its customers where the business now provides a full spectrum of IT services and solutions, including digital infrastructure, cloud and cybersecurity. Under Bríd’s leadership, the Irish operation is set to become the strategic hub to support Presidio’s international expansion outside of the US, with particular emphasis on growth in Europe and Asia Pacific.

Bríd takes on her new role having served for the past two years as managing director of the Product Procurement division led out of Ireland. A key member of the management team of IT services company Arkphire before being acquired last year by Presidio, Bríd played a central role in the success of the Arkphire business, growing the business’ multinational client base both in Ireland and internationally. Bríd originally joined the Arkphire business in 2011 as an account manager for enterprise customers having previously worked in a similar role with IT business EDS.

Bríd’s appointment now sees her take over from Paschal Naylor, former CEO and co-founder at Arkphire, who is retiring from his executive role after more than 40 years in the business.  Paschal has been appointed to an advisory role where he can continue to provide his guidance and support to the business.

Commenting on the appointments, Bob Cagnazzi, Chief Executive Officer of Presidio said: “Supporting our multinational clients and growing internationally is a key priority for Presidio, and we are thrilled to have Bríd bring her talent and passion for providing the best possible customer experiences to this strategically important leadership role.”

Commenting on her new appointment, Bríd Graham said: “I look forward to working with Bob and the rest of the Presidio team in building the Presidio brand internationally and bringing the full breadth of our IT offerings and expertise to our global customer base.”

Originally from Portlaoise, Bríd holds Postgraduate Diplomas in both International Sales and Marketing and Marketing Management as well as a Bachelor of Arts degree from University College Dublin.

Last year, Presidio acquired Arkphire, the Irish owned and headquartered IT solutions and managed services company. The Irish operation has now been rebranded to ‘Presidio’ and operates as a fully integrated part of Presidio’s $3.1 billion business.

The Central Bank has announced that, with...