Only 32% of Workers in the Overall ICT Sector are Female! 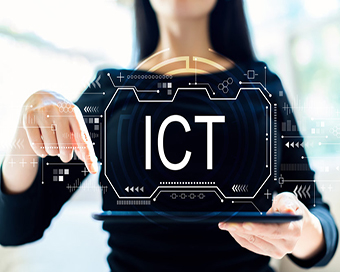 Commenting on the publication, Michael Connolly, Senior Statistician said: “This cross-cutting analysis of the ICT sector draws on areas across the CSO such as Census, Business, Labour Market and Macro Economic data to allow an in-depth review of the ICT value chain in Ireland to be produced.

Looking at the contribution to Gross Domestic Product (GDP) by firms in this ICT value chain analysis, {released today}, the dominance of foreign owned multinational corporations (MNEs) is evident. The same story emerges from a review of capital investment in the sector, where Intellectual Property (IP) assets owned by these MNEs also predominates.

But critically, when we consider the human capital contribution in the value chain, we see that almost half of the highly educated workforce are employed by Irish firms.

These domestic firms are active in export markets with almost half of their IT production being exported (€1.9bn). Interestingly, this value chain analysis also presents evidence of knowledge sharing or spill-overs of expertise between large MNEs and domestic firms with nearly 9,000 workers (10% of ICT employment) changing jobs in 2019 but remaining in the ICT sector.

Workers in this sector have the highest average annual earnings in the country.

It generates more wages paid in Irish households than labour intensive areas such as hospitality or construction. The ICT sector has a highly educated workforce: almost two thirds had a college degree or higher. The wage levels may also be explained by the fact that it is also a very productive sector: the value added per hour worked is exceptionally high.

However, the sector does have a significant gender imbalance: Only 32% of workers in the ICT sector are female: among Telecommunication Engineers this falls to a low of just 5% women.

While large foreign multinationals dominate the job market, domestic companies employed almost half (40,746) of those (90,766) employed in the sector.”

Looking at the importance of capital, Michael Connolly, Senior Statistician, further commented: “The productivity analysis in this publication highlights the importance of capital in explaining the extraordinary performance of this sector. Global ICT brands have moved operations to Ireland that are serving multiple countries. With these come the valuable patents and intellectual property underlying their highly profitable services. This productivity performance is driven by the large capital assets that foreign owned MNEs hold in Ireland. However, another perspective on productivity is presented where the impact of globalisation can be clearly seen. The results by firm size show the large foreign owned MNEs are 10 times more productive than the small and medium sized Irish firms, which results in a productivity profile for the domestic companies that is more comparable with European norms.

The report presents some of the staggering figures for the global corporations here: imports and exports that amount to a quarter of the GDP for the country as a whole. The large foreign multinational ICT companies are making large profits here, most of which flow out to their owners, but they paid almost €4bn in taxes in 2019 before their profits flowed out. As well as their wages paid, they also show some ‘spill over’ of expertise with domestic firms. Analysis also shows that around 20% of people who change jobs in the ICT sector go between the foreign multinationals and domestic enterprises.”

Closing the Gender Pay Gap in...

What is the Gender Pay Gap? The gender pay...