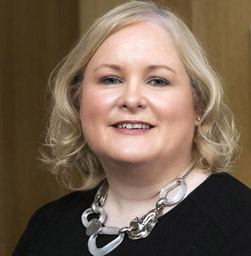 With a career in financial services and telecommunications spanning three decades, Lorna is considered a global leader in technology. She is actively involved in developing the technology ecosystem in Ireland as Chairperson of Technology Ireland. In addition to her work with Technology Ireland, Lorna is a staunch advocate of promoting inclusion and diversity in STEM. She spearheaded the development of a multi-faceted program that affected sustainable change for women in STEM within Fidelity Investments, local communities, and industry. The program received the inaugural Women in Technology Award from Technology Ireland in 2018. Strengthening her commitment to this cause, Lorna has served as a Gender Diversity Ambassador with Women Mean Business during the pandemic.

Lorna is also a Board member of the Irish American Partnership which supports education and community programs across the island of Ireland.

Commenting on her appointment as Regional Chair, Lorna Martyn stated: “I am delighted to continue my journey at Fidelity Investments Ireland. In the 18 years I have spent with the organisation, I have witnessed its evolution from a small technology talent focused presence to a large contributor, bringing unique perspectives based on integration to the European business, research, and development landscape. In my new role as Regional Chair, I am excited to continue to help Fidelity Investments Ireland grow and innovate.”

The Institute of Directors (IoD) in Ireland...