Supporting Democracy: Women in Leadership, Equality and Empowerment in Europe. 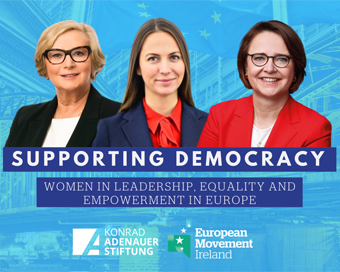 Following on from IWD earlier this month, EM Ireland and the Konrad-Adenauer-Stiftung held an online event today titled, ‘Supporting Democracy: Women in Leadership, Equality and Empowerment in Europe’.

Event speakers highlighted the role of women in multilateralism and geopolitics, particularly in the context of the Russian invasion of Ukraine and the broad impacts of the empowerment of women in European politics on society as a whole. This event was the first of three planned EMI-KAS events in 2022 focused on the theme of Supporting Democracy.

Speaking at the event, Frances Fitzgerald MEP for Dublin and Vice Chair of the EPP Group said,

“Democracy and gender equality are inextricably linked – Despite great strides being made in recent times, women and men in Ireland, across Europe and globally continue to live in unfinished democracies as a result of gender inequality.

Ireland and Europe are staunch supporters of the multilateral rules-based international order that citizens have enjoyed over the last number of decades but this system – which is underpinned by the values of democracy, the rule of law and gender equality – is now under severe threat as a result of the illegal invasion of Ukraine. Let us remember that having women at the negotiating table and involved in both military and diplomatic channels is absolutely essential to move towards and build a lasting peace. We need women at the table to build a secure and safe future for Ukraine too. As a prominent member of the EU and UN, today’s discussion provides us with a unique opportunity to debate and identify Ireland’s ability to further exert its influence in advancing gender equality in all areas of our society while also supporting the women of Ukraine”.

Annette Widmann-Mauz MdB, Federal Chairwoman of the CDU Women’s Union, Member of the Foreign Affairs Committee in the Bundestag and Former Minister of State to the Federal Chancellor said, “Women make up more than half the population, and they should be equally represented. Representation is the core basis of democracy. Not only do we need the female perspective, increased numbers of women in leading positions encourages women to stand up for their issues and to realise their potential.

Politics must urgently display and actively address all upcoming causes of retraditionalisation. Gender equality is a fundamental human right. The gender discrimination still holding too many women back, holds our world back.“

Eva Maydell, MEP and President of European Movement International said, “Women must be at the heart of multilateralism. Outcomes for all society will improve when women are fairly represented in proliferating peace and preventing conflict. A diversity of decision makers will improve the quality of decision-making. The devastation of war is clear for all to see on the news and in the papers. However, we don’t always see the devastating long-term impact on women’s lives.  Whether a woman has a child or a gun in their hands, women are at the centre of conflict. We know existing inequalities are exacerbated during conflict, and that women are vulnerable to poverty, displacement, and rape as a weapon of war.

It is up to all of us to ensure the voices of women are heard and echoed through a lasting peace, and that decades of hard-won progress does not retreat into the shadows.”

Katie O’Connor, from the Konrad-Adenauer-Stiftung UK & Ireland office delivered a welcome address at the event, which was moderated by Noelle O Connell, CEO of EM Ireland and Vice President of European Movement International.

Noelle O Connell said, “The effectiveness of our democracies in Europe is measured by our abilities in including, empowering and supporting women in decision-making bodies, public institutions, political parties, government departments and civil society organisations. While Ireland begins to mark 50 years of our EU membership, it is a time to also reflect on the position of women in leadership at home.

We find that in Ireland just 24% of local councillors, 23% of TDs in the Dáil, and 41% of MEPs are women, while just 31% of those on the boards of the largest publicly listed companies in Ireland are women.

As we marked International Women’s Day this year, the importance of the representation of women was thrown into sharp focus by the unfolding tragedy in Ukraine. Now, more than ever, women should have an equal role in multilateralism and geopolitics. It was therefore timely to hold today’s discussion with Konrad-Adenauer-Stiftung, highlighting the importance of gender equality in our democracies and in upholding democratic norms and values in Europe and beyond.”

You can watch today’s event back here.

Attraction and Retention of...

Employers in Ireland are encouraged to look...