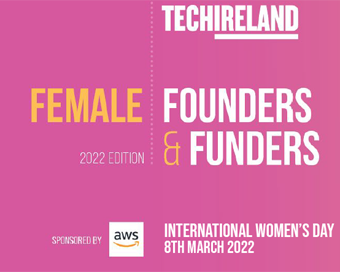 According to a new TechIreland report, last year Irish Female Founders raised more than €230 million, more than twice the record €105 million raised the previous year. The findings are contained in a new report published today to coincide with International Women’s Day.

The report shows that in 2021, fifty five tech start-up and scale-up companies with a female founder or co-founder raised €230 million through Venture Capital, Grants, and Angel Investments.

•In 2018 when TechIreland launched the €100MCampaign for more funding for female founders, the target of €100M f in a single year looked hugely ambitious. In 2020, this glass ceiling was broken when Irish female founders raised €105 million. Last year that record was smashed as they raised over €230 million in the year.

•This year’s report also highlights the gender balance within the investor community.

Only 20% of the partners in Irish VCs are female and 30% of the mid-level team.

•TechIreland tracks more than 470 female founded companies, 16% of the overall startups and scaleups on the island.

•Despite the huge jump in funding, companies with a female founder still raise less than the general population of tech companies.

While female founders on average doubled their investment to €4.1 million last year, that was still significantly less than the average of €5.3 million for all companies.

HealthTech, specifically Life Sciences, remains the top sector among female founders, adding to €117 million or 50% of the total.

•In terms of the number of companies funded, Enterprise Solutions tops the chart with 35% or 19 of the 55 companies. Sectors such as CleanTech and FinTech recorded marginal increases in investment activity, whereas others like AgriTech, Education and Consumer products saw a marginal decline.

•The report also shows that Dublin-based female founded companies received more than 66% (€152 M) of the total. That is higher than the 46% share Dublin companies made in 2020. However, there were significant investments in female-founded companies in Galway, Cork and Mayo.

•Funding into Female-founded companies in Northern Ireland represents less than 1% of the total funding raised, well down on their 4% share in 2020.

Responding to the report

“diversity is really important as all the research shows that diverse teams perform better.

From an investor’s perspective, and for Ireland, better performance means more wealth and employment. These are great results, but they are not grounds for complacency – females-led tech businesses still only get 13% of the investment into Irish tech. We can and must do better than this.”

Sarah Jane Larkin of the Irish Venture Capital Association said, “We can be confident that the investment climate for female founded companies in Ireland is improving. However, none of us can be happy with a world where women secure only 13% of all funding, and we must now focus on efforts to accelerate the funding of female founded startups.’’

Sheelagh Daly of Enterprise Ireland said, ‘‘Back in 2011 only 7% of EI backed HPSUs included a woman founder. By putting a spotlight on this and providing capability and funding supports specifically targeting women, this has now tripled to over 21%.’’

Jennifer McMahon of Seroba Life Sciences said, ‘‘Change is underway and great strides are being made, such as the €117 million invested in the HealthTech sector alone. Yet, numerous studies indicate that female founders face challenges in accessing capital, and in closing the confidence gap. We need more female led start-ups and various initiatives have created a nurturing environment for founders to ‘start’.’’

Niamh Parker of Altada Technology Solutions said “We are fortunate that the Irish government has a clear focus on growing the indigenous tech startup sector and is incredibly supportive of female entrepreneurship.’’

Gender diversity at senior levels in the...