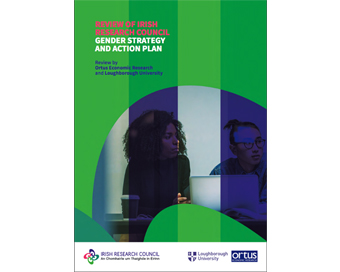 The IRC has demonstrated international leadership on promoting gender equality, with many research agencies in Europe and beyond looking to its gender policies as a model of good practice that can be replicated locally.

The report assesses the impact of the strategy in improving gender equality in research in Ireland and found evidence of a strong performance in relation to the proportion of IRC awards made to women.

Data on the success rates for applications to IRC programmes indicate that the IRC’s funding processes are fairly delivering awards to both women and men.

Measures introduced as part of the strategy, such as ‘gender-blinding’ of research proposals are believed by IRC stakeholders to have made a considerable contribution over the course of the strategy to ensuring that there are no disparities in success rates for women. Progress has also been made by the IRC in targeting better representation of women on its international assessment panels.

The overall proportion of women across IRC panels has grown steadily over the course of the Gender Strategy and exceeded the target of 40% minimum in 2019 (44%).

The report identifies continuing challenges, chiefly the fact that gender parity in awards does not prevail across the career lifecycle, as the proportion of applications from women starts to decline as early as postdoctoral research stage. Although there is no evidence of any disparity in success rates, relatively lower applications from women result in a lower share of awards at the more advanced career stages.

Commenting today, Peter Brown, Director of the Irish Research Council, said: “Close to a decade ago, the IRC began taking steps to foster gender balance in research and indeed led the way internationally in this regard. The IRC was the first research funding agency in Ireland to publish a Gender Strategy and Action Plan, in 2013.

“The measures introduced by the IRC have helped to combat any unconscious bias from the peer review process whilst also achieving better gender balance on its international assessment panels. These measures along with the broader gender strategy have helped to foster equal opportunities and outcomes for both women and men, particularly at the formative stages of their career, supporting Ireland’s ability to attract and retain the most talented, creative and innovative researchers.

“Much progress has been achieved and we can see its impact today. It is particularly heartening to see the strong support within the IRC’s stakeholder community for the measures that have been implemented.

The review also captured feedback pointing to the need for a continuing focus on flexibility and support for researchers, in particular those who have caring responsibilities.

The report also rightly highlights the need to consider other equality grounds as we move forward. Ultimately, it is about developing policies and practices to ensure that we retain and support excellent people across disciplines and across our research and innovation system, regardless of background.”

As part of the review conducted by Ortus Economic Research and Loughborough University, a survey was carried out of IRC funded researchers, reviewers and Equality, Diversity & Inclusion representatives (EDI) from higher education and research institutes.

•83% of applicants are in favour of measures to ‘gender-blind’ assessment.

•78% of the IRC’s international peer reviewer community believe that assessment processes have become more ‘gender-proofed’ in the last five years.

•The IRC has also been successful in creating a better gender balance in its assessment panels. The proportion of female panel members has risen steadily from an average of 38% in 2013 to an average of 44% in 2019.

The second key plank of the Gender Strategy and Action Plan is to drive the greater integration of sex/and gender dimension in research content. As early as 2013, the IRC made such considerations a requirement of all research proposals. Where research design and implementation take account of the differential aspects of sex and/or gender, the resulting knowledge has greater validity and robustness.

“Requiring as the IRC does for all major research proposals to outline the sex/gender dimension is an important step in delivering research which meets the standard of excellence.

Countless examples exist of the negative repercussions arising from poorly designed research studies that did not consider differences between sexes and the gendered nature of society. Although more awareness and training are required, we are pleased that the steps taken by the IRC some years ago are bearing fruit in terms of enhancing research design and methodology.”

The report makes a number of recommendations, and these will inform the development of a future strategy for the IRC in the area of gender, equality, and diversity.

You can read the IRC Gender Strategy Review 2022 here>>

An Taoiseach Micheál Martin launched the...