Breakthrough Cancer Research announces exciting new cancer research that has unlocked the key to why some cancer cells are resistant to chemotherapy, which has led to a new Lithium Enhanced Chemotherapy treatment

Breakthrough Cancer Research (Breakthrough), University College Cork (UCC) and Cork University Hospital (CUH) are thrilled to announce exciting new cancer research that has unlocked why some cancers are drug resistant, which has led to a novel chemotherapy treatment incorporating Lithium.

This breakthrough could improve the outcomes for (approx.) 3905* people who are diagnosed in Ireland every year with these diseases, which are responsible for almost 1750 deaths annually.

The research, which was funded by Breakthrough and led by Dr. Sharon McKenna at UCC, has found that adding lithium to the chemotherapy regime blocks the cancer cells’ ability to repair the internal damage normally inflicted by chemotherapy. This makes the chemotherapy more effective and reduces the risk of the cancer returning again. Lithium has been used before as a mood stabiliser in the treatment of neurological disorders – but not in chemotherapy, so this is a novel concept that is being tested in a Phase I clinical trial.

During the clinical trial, which has just enrolled its first few patients in Cork, the clinical research team will be monitoring the safety of combining lithium with standard chemotherapy, over a range of doses. It will also establish how well lithium works in combination with oxaliplatin and capecitabine to treat patients with advanced oesophago-gastric or colorectal cancer*.  Because this is an alternative use of a known drug (lithium), it is likely to have a shorter timeframe to be adopted for treatment, should it prove safe after completion of this initial trial phase.

Colorectal cancer is the second most common cause of cancer related death in Ireland (1010 annually) and there are more than 2819 new cases each year.  Oesophageal and stomach cancers have two of the lowest 5 year survival rates at just 24% and 30% respectively.

Because these types of cancers are rarely detected early enough for surgery (as they are internal), chemotherapy is the most common treatment.  However, the cancer cells can be highly resistant to the chemo drugs, so the cancer frequentlycomes back.

Recognising this challenge, Breakthrough Cancer Research invested over €1 million in funding to researchers at UCC so they could explore how cancer cells that responded to chemotherapy were different from those that did not. They identified that a cell recycling process called autophagy (self-eating) enabled the cells to repair themselves and recover.  They then found that lithium blocks this ability to repair, which greatly enhances the effectiveness of the chemotherapy treatment. 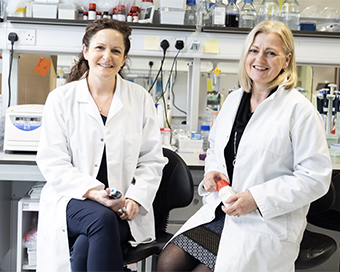 The phenomenal discovery was made when Dr Tracey O’Donovan, one of the lead scientists working with Dr Sharon McKenna, Principal Investigator at Cancer Research @ UCC, set up a series of tests with cells from oesophageal cancer patients. The results were far more impressive than any combination they had seen before as the combined Chemo-Lithium therapy killed off the chemo resistant cancer cells and prevented them from returning.

“We were so thrilled to find a combination that could potentially make an impact on the effectiveness of treatment and improve survival.  We tested this new Chemo-Lithium combination in several pre-clinical models and found that tumours were being cleared much more effectively than single agent treatments.” said Dr O’Donovan.

Consultant Oncologist Professor Seamus O’Reilly, based at Cork University Hospital and Mercy University Hospital, was so inspired by the results that he agreed to lead the clinical trials, as he knows only too well the value and lifesaving potential of a breakthrough like this.

“More and more patients are being diagnosed with cancer in Ireland on a daily basis, and we need to extend their lives. Patients don’t fail treatments but treatments sadly do fail patients.  We urgently need treatment advances to cure more people and to help those that can’t be cured to live longer and better.  That can only be found by investing in ground-breaking cancer research, so I hope people continue to support charities like Breakthrough Cancer Research who help make research like this happen.”

He added, “Many new cancer drug treatments are expensive, limiting their impact as societies and patients struggle to afford them. Lithium is much cheaper and could be globally accessible”.

Orla Dolan, CEO of Breakthrough Cancer Research, the leading cancer research charity in Ireland for poor prognosis cancers, said, “Resistance to chemotherapy is a major challenge for clinicians and devastating for patients. This discovery was fuelled by collaboration between researchers in the lab and doctors in the hospital working to overcome clinical challenges.  This is a wonderful example of how patient focused research supported by the generosity of the public can translate from the lab into new treatments in the clinic.”

Breakthrough is an Irish medical research charity focused on cancer research.  They aim to disrupt cancer’s future and save lives, one research breakthrough at a time. Breakthrough funds scientists, researchers, and clinicians throughout Ireland and around the world to tackle the most difficult to cure cancers and deliver better futures sooner for those diagnosed with the disease.  The researchers they support currently have a particular focus on lung, ovarian, malignant melanoma, skin, pancreatic and oesophageal cancers.  Over the past 20 years, Breakthrough has brought 8 new treatments successfully to clinical trial.

Entering Saturday’s final round of the...

Companies have been urged to take advantage...