Improve Gender Balance at Senior Leadership Level and Board Balance will Come! 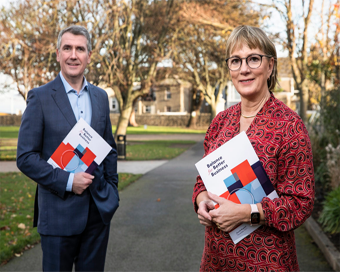 The fourth report of the Balance for Better Business Review Group shows that Irish businesses have made important progress in achieving gender balance at Board level within the past year in Ireland. The report was today launched by the Tánaiste and Minister for Enterprise, Trade and Employment Leo Varadkar TD and the Balance for Better Business Co-Chairs Julie Sinnamon and Aongus Hegarty.

The report from the Government established initiative shows that the overall trends at Board level are positive, although concern remains around progress at senior leadership level.

In 2021, the percentage of women on the Boards of ISEQ 20 companies rose to 31%, up from 18% meaning that the top publicly listed companies in Ireland are well on track to achieve the 33% goal by the end of 2023.

As of November 2021, Ireland had moved up to 12th position from 17th on the list of women on company boards for the largest companies in the EU27

illustrating the progress that has been made since Balance for Better Business was first established in 2018. 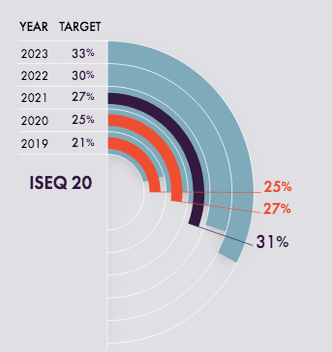 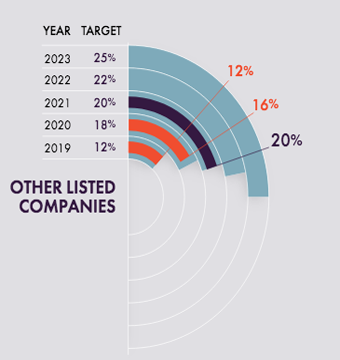 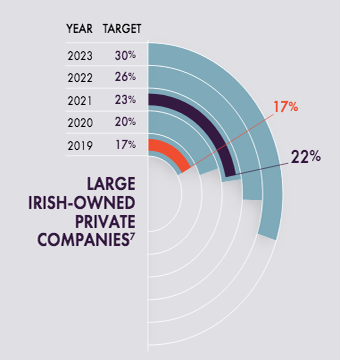 While the ISEQ20 companies have exceeded their 2021 target for female representation at senior leadership level, other listed companies and large Irish owned private companies have both missed their targets for the end of 2021.

Although it has been a stated target of Balance for Better Business that no listed companies should have an all-male board,

there are still five (13%) listed companies with all-male boards.

Commenting on the report, the Tánaiste said: “It’s encouraging to see further progress has been made this year and I’m especially pleased that we have reached the interim target of having 30% female representation on the boards of the ISEQ20 companies. In 2018, the average was only 18%, so this is significant progress, however it is a far cry from the equal representation we aspire to and clearly more needs to be done.

“Women are still underrepresented in executive director roles and progress to rectify this issue has been too slow. There are still five listed companies with all-male boards.

Change takes time, but the progress made shows what can be achieved when companies focus on making change happen. I hope next year to see greater progress on senior leadership targets.”

However, the missed targets by other listed companies and large Irish owned private companies are in line with the findings of the latest OECD report on the gender pay gap across OECD countries, which shows that

in spite of societal changes over decades and various labour market, educational and public policy initiatives, women continue to earn less than men and that gap is highest amongst the highest paid.

Gender Pay Gap reporting will be introduced in Ireland in 2022, mandatory reporting which will include reporting on the reasons for any pay gap, should encourage Irish businesses to look beneath the figures, to establish the root cause or causes for any pay disparity between men and women and bring about a cultural change where needed.

It is well established that more diverse boards and leadership teams attract and retain the most talented individuals and yield better results overall. Irish business have an opportunity to lead this change, the ISEQ20 companies on track to meet their 2023 target are evidence of this.”

While work remains to be done at the board level, the real challenge is in achieving balance at leadership level in organisations.

We will continue to highlight how proactive talent management and succession planning provide pathways for business to facilitate change in their own organisations.

A strong and robust pipeline of future female leaders influences the shape of future leadership teams and boards. This will provide sustainable, long term change, in a way that continuing to place too much emphasis on recruiting women to boards cannot.”

“There are still too many companies with all-male boards and leadership teams in Ireland. Achieving gender equality requires honest and rigorous self-assessment, time, and sustained effort and that’s why we’re calling on companies to do three things. 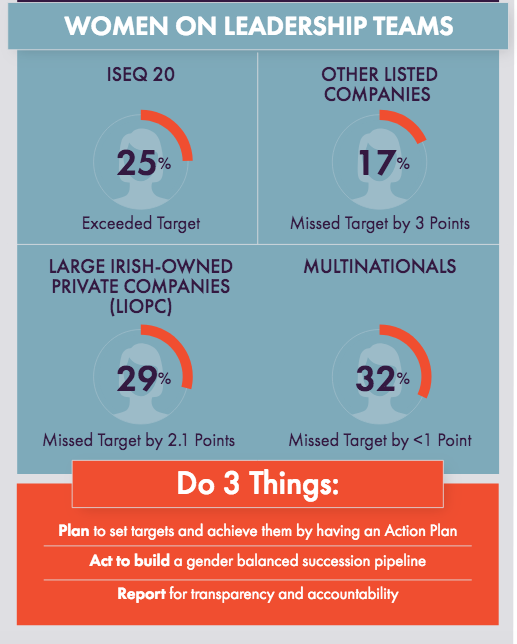 Firstly, set targets and have an action plan, treating gender balance like any other business objective. Secondly, build a gender balanced succession plan at both board and executive leadership team level. Thirdly, report on your progress to achieve transparency and accountability, as this will send a clear message to potential talent, to customers and customers that you understand and the value a more diverse and inclusive workforce.”

Earlier this year, the National Women’s Council of Ireland (NWC) called for quota legislation to be introduced.  In reaction to the Balance for Better Business Report, they acknowledged that it was ‘Great to see progress on #betterbalance for women on boards this year. We must ensure this positive change continues, and also name the fact that 13% of listed companies have all-male boards and 1/3 of listed company leadership teams have only male members #genderbalance’.

NWC also reiterated that ‘The pace of change needs to be quickened, and this is why NWC calls for the introduction of gender quota legislation to ensure a 40% gender balance on the boards of all private companies to effect meaningful change through our #WomenOnBoards campaign. #BalanceTheOddds .

Welcoming the latest report from the Balance for Better Business group, Maura Quinn, Chief Executive of the Institute of Directors in Ireland (IoD), commented: “Board diversity – in all its forms – is not just ‘a nice to have’, it’s about being commercially effective. It allows the best mix of skills and expertise to be harnessed to drive long-term shareholder value and business growth. We need to address some of the barriers to more diversity in the boardroom, such as poor succession planning, unconscious bias and less access for women to the same networks of contacts as men. The findings in this latest Balance for Better Business report validate the setting-up of this Government-backed initiative in the first instance. It proves once again that gender diversity, in particular, in business in Ireland requires close and consistent monitoring.”

When Will We Get Back to the...

The largest cohort (37%) of business leaders...