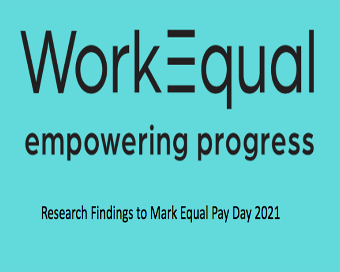 74% of people believe closing the gender pay gap is important and should be a priority for government and employers. That’s according to research released by WorkEqual today (08.11.21) to mark Equal Pay Day 2021. Equal Pay Day is the date on which women in Ireland effectively stop earning, relative to men, because of the gender pay gap, which currently stands at 14.4%.

According to WorkEqual’s founder Sonya Lennon, this means women in Ireland effectively work for free for the last 14.4% of the year, i.e. from today.

“Our research shows the public are in strong favour of action from government and employers to close the gender pay gap,” said Sonya Lennon.

“The Gender Pay Gap Information Act was enacted earlier this year, which will mean large employers must report on their gender pay gaps from 2022 onwards. We are calling on employers to be really proactive about this. Reporting is just one small aspect of addressing the gap. It needs to be accompanied by action plans, setting out how individual workplaces will tackle their gender gaps. Although workplaces with less than 250 employees will not be covered by the Act in its initial years, we also want to see smaller employers embracing change and taking steps now to address the gender pay gap.

“All of this must be backed up by ongoing political will and public support. The Government has promised a public awareness campaign to inform people about the new legislation. Our research shows strong support for addressing the gender pay gap, but it also points to confusion amongst the general public as to what exactly causes the gap.

We need an effective campaign to educate people about what exactly the pay gap is; why it is important to address it; and what the multiple complex factors are that cause it.”

The findings released by WorkEqual today are based on research undertaken in October 2021 by B&A. An online survey was conducted with a nationally representative sample of 1,011 adults aged 16+. Key findings include:

•67% are in favour of pay transparency: they believe people should have the right to know what other colleagues doing the same work are paid. Support is highest amongst women (70% of women agree vs. 63% of men).

•The vast majority of people (70%) believe concerns about the gender pay gap represent awareness of a real issue. In contrast, 16% believe they are an example of political correctness going too far.

In addition to surveying people about the gender pay gap, WorkEqual’s research also focused on how caring and household duties are divided between men and women in their own households.

Commenting on the findings, WorkEqual CEO Angela Smith said: “The failings in Ireland’s childcare system have been well-documented.

Our research clearly shows how childcare – and broader family responsibilities – impact on people’s careers and, in particular, how women bear the brunt of this.

“On a hopeful note, men who experience family life are more aware of the gender pay gap and the impact this has. And, overall, there is strong public support for action by government and employers to close the gender pay gap. We still have a long way to go and we need the support of everyone – women, men, workplaces and elected representatives – to make Ireland a much more gender-equal society.

WorkEqual’s Equal Pay Day activities are taking place as part of the organisation’s annual campaign to promote workplace gender equality. The campaign has run every November since 2016 and is sponsored by SOLAS, the further education and training authority, and Permanent TSB.

This year, the campaign’s focus is on childcare and how family caring duties impact on workplace gender equality. A flagship seminar – ‘Reimagining Childcare Provision’ – will take place on Thursday, 25th November, featuring international guest speakers showcasing best practice in public childcare provision, and a panel discussion on the challenges and solutions from an Irish perspective. The event is free to attend, and you can register now at www.workequal.ie.

A billboard erected in Greystones, Co....

The proportion of Irish Research Council...