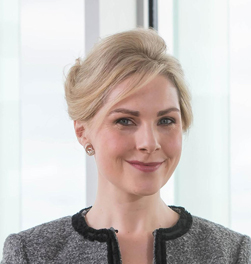 Matheson is pleased to confirm that Kate McKenna, partner in its EU Competition and Regulatory Law Group, has been elected as Chairperson of The Irish Society for European Law (ISEL).  The ISEL, which was established in 1973 on Ireland’s entry to the EU, is an association of practising and academic lawyers tasked with promoting the study and practice of European law in Ireland.

Kate, who will serve a two-year term as Chairperson, has been a member of the ISEL for over 10 years, and has featured as a speaker and panellist at numerous ISEL events.  She succeeds barrister and law lecturer, Dr Aoife Beirne BL.

Commenting on her election, Kate said, “I am delighted to have been elected as Chair of ISEL.  With the twin challenges of Brexit and a global pandemic, promoting awareness of European law and Ireland’s new place in Europe assists all organisations in navigating a complex environment.  I am looking forward to working with my ISEL colleagues to continue its good work.”

The ISEL organises public lectures and workshops on topics relating to European Union law and European Human Rights law.  It is the publisher of the Irish Journal of European Law (IJEL) and it prepares and disseminates papers for the Fédération Internationale de Droit Européen (FIDE), of which it is the Irish affiliated member.  FIDE is the International Federation for European Law and is the leading international organisation dedicated to the research and analysis of European law and its interaction with the national laws of Member States.

Margaret Hearty has been appointed as the...