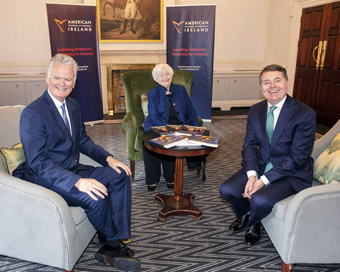 This was Ms. Yellen’s first trip to the country in her role as Treasury Secretary and in a recent tweet she said she was delighted to be in Ireland.

“This is a special visit for me, highlighting the strong bond our two countries share. I thank @Paschald for his warm welcome on my first stop in Dublin, and for a constructive meeting this morning.”

Occurring between the G20 meetings in Rome and COP26 in Glasgow, this roundtable discussed the historic Organisation for Economic Co-operation and Development (OECD) Inclusive Framework/G20 global tax agreement supported by 136 countries.

In advance of the Roundtable, the American Chamber’s CEO, Mark Redmond, thanked Secretary Yellen for her leadership in bringing global consensus on multinational corporate tax, which will result in a framework fit for the 21st century. Mr Redmond also paid tribute to Minister Donohoe for his commitment to certainty and transparency in economic policy, protecting Ireland’s reputation as a trusted partner for US investment and his constructive engagement in the OECD process. Mark Redmond made the following statement on US-Ireland trade and investment relations:

“Today is an opportunity to remind ourselves what Ireland’s trusted trade and investment partnership with the United States has achieved. Over 180,000 people are at work in US multinational operations across Ireland, saving and enhancing lives across the globe. Through these operations, US business is accessing key global markets – with Ireland now the only English-speaking, common law gateway to the European Union. Notably, 94% of AmCham members say their US corporate HQ has a positive view of Ireland as a location for further investment.

Many benefits have accrued to the United States from decades of investment in Ireland. People are constantly surprised to learn that over 110,000 US citizens across all 50 States work for Irish companies – these Irish operations include global leaders in nutrition, infrastructure and life-sciences who have invested billions of dollars in facilities and R&D across the US. With just 0.06% of the world’s population, Ireland is the 9th biggest investor in the United States,” said Mark Redmond. 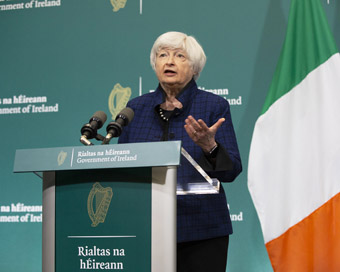 US Secretary of the Treasury, Janet L. Yellen speaking at a press conference in Government Buildings during her official visit to Ireland.

Named as one of the most powerful Irish...

Irish businesses of all sizes and all...