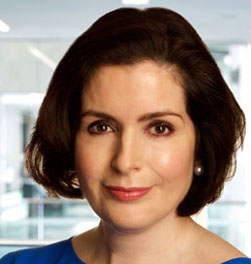 Bank of Ireland Group has been recognised by the INvolve Organisation, global leaders in Diversity & Inclusion, with three listings in the OUTstanding LGBT+ Role Models Lists, published annually by INvolve, including a top three ranking for Group CEO, Francesca McDonagh, in the Top 50 Ally Executive List.

The lists showcase LGBT+ business leaders and allies who are breaking down barriers and creating more inclusive workplaces across the world. Bank of Ireland is positioned among global leaders in Diversity & Inclusion practice in their respective industries and organisations:

Francesca McDonagh, has been recognised for her wide-ranging activities in support of a culture of inclusion at the Bank.   As Group CEO, she holds overall accountability for Group Diversity & Inclusion (D&I) Programme which includes the With Pride LGBT+ Network.

Commenting on the listing, Francesca McDonagh said: “I am honoured to be included in this year’s list, and in the company of an inspiring group of role models. Organisations like INvolve play a really important role in championing diversity and inclusion in business.

“Lists like this show the power of visibility, and they encourage more visibility in each of our organisations. They remind us of the progress we have made in recent years. But they also caution us against complacency. This year, homophobic incidents in Waterford and a serious physical attack in Galway have reinforced to me that visible support for the LGBT+ community matters as much as ever.

“Diversity & Inclusion must be treated as a priority for your customers, colleagues, and the communities where you do business.  That’s why, at Bank of Ireland, it is a core part of how we think about our culture as an organisation.”

Gavin Kelly, has been included for the second year running in the “50 Ally Executives Role Model List” list.  As Executive Sponsor for Bank of Ireland Group’s With Pride Network, he is a vocal senior ally in his promotion of inclusion for LGBT+ colleagues, customers, and communities. Kirsty Mulholland is co-chair of Bank of Ireland Group’s “With Pride” Staff LGBT+ Network and Bank of Ireland’s representative on FuSIoN Northern Ireland, Financial Services Inclusion Network.  She has been included in the “Top 100 LGBT+ Future Leaders List”.

Margaret Hearty has been appointed as the...