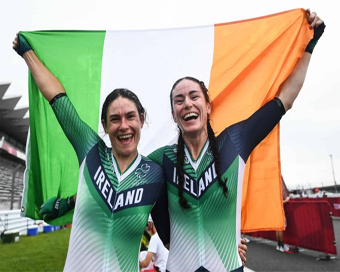 Irish cyclists Katie-George Dunlevy and Eve McCrystal won gold in the B time trial at the Fuji International Speedway in Tokyo yesterday (Tuesday 31st August, 2021). Katie-George has said that she hopes her gold medal success at the Paralympic Games will inspire a generation of visually impaired people.

She and pilot Eve took first place in the event after a barnstorming ride which demolished their opposition from the first lap to the last. It is their second medal having won silver on the track. The race, around the famous motorsport venue saw them consistently set the fastest time at the splits – their dominance such that they over took their opponents who started a minute ahead.

There was little the other competitors could do as Katie and Eve came home, arm raised in triumph to take a gold for Ireland.

The Irish crew covered the 32km course in 47:32.07 with silver medallists Lora Fachie and Corrine Hall finishing 48:32.06 and bronze went to Swedish pair Louise Jannering and her pilot Anna Svaerdstroem who finished in 49:36.06.

The Irish team retained their title of Paralympic champions that they won in the Rio games five years ago.

“Just for kids or adults at home with a visual impairment, our success today shows that you can do anything you want to do. There is nothing you can’t do.

This might inspire them and I know it gives pride to the people at home and just an up lift for them after two years of the pandemic.”

Both Eve and Katie-George said that they felt as one on the bike – that the technical course did little to effect their rhythm and, critically, their speed through the corners.

Eve said: “When we got silver at the World Championships, I lost that for us on technical ability. So today I was a little bit worried with the technical aspects of this course – I prefer a power pan flat course. Today was different over and under course. I went around with Neill the last two days and I knew what to do. I just needed to execute that. It flowed really, really well. I can’t believe it. I was nervous of it. I wasn’t worried about our power or our ability to win it was just my worry was about those bloody corners because with tandem if you slow the bike down too much it is very, very hard to get rhythm going again. So you have to keep the bike going, and for a course that wasn’t a flowy course, I felt like it flowed. We moved as one unit.”

“It felt like I was on my solo bike, it just flowed – we moved as one unit,” she added.

Katie backed up what Eve said and believes that the they acted as one throughout the race – she said that she sensed Eve was nervous but that they had faith in each other.

“It means the world to me, working for five years towards this. We wanted to come here and retain the title but really wanted to get the best out of ourselves and have a good ride and hope that would give us a medal and then a gold medal. We heard on first lap that we were up and we were just moving the bike together. That was the ride of our lives to get that – we were just moving as one. I felt before, warming up, had a feeling warming up that I was going to fight for the win and we did it,” she added.

Both riders have spoken about how difficult it has been to be away from family and friends as they trained.

Eve, became emotional, as she spoke of the challenges of being a mother as she trained for the games. “I know (daughters) proud of me. My two children are proud of me. Like my two children started school today and I missed that as a Mam. I have missed so many occasions with the kids but what I can say to them today when I ring them and say:

“How was your school today – Mam won a gold medal with Katie in the Paralympic Games for Ireland”. That means the world to me as a mother,” she said.

The riders have said that tribute and gratitude must be paid to the backroom staff, especially coach Neill Delahaye, who has worked hard with them to reach the games.

Katie-George and Eve will line out at the road race at the same venue at 5am Irish time on Friday, 3 September.

InterTradeIreland has announced that in the...