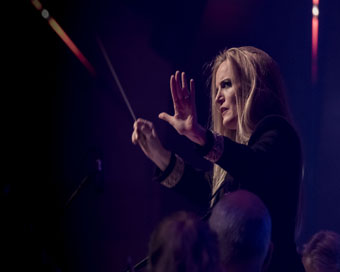 The Irishwoman who this year became first female conductor at the Oscars has joined the line-up for Network Ireland’s Annual Conference and Businesswoman of the Year Awards. Eímear Noone will be at the Theatre Royal in Waterford for the event which will be streamed live to a virtual audience on October 8th.

The award-winning Galway native’s address will be one of the highlights of the event’s packed running order which also features panel discussions on diversity & inclusion, technology, entrepreneurship in food, investment and sport. Female vocal group Alchemy Vox will add some music to the day’s events.

Eímear Noone has won multiple awards for her work on the soundtracks to 26 film and game productions, and her music has reached over 100 million people. She first spoke to the Roscommon branch of Network Ireland earlier this year and says she’s looking forward to the next event: “I’ve been amazed at the level of determination and dynamic energy within this great organisation. Considering everything they’ve been through in the last couple of years, you really get a sense that they’re supporting and helping one another focus on moving forward and reaching their goals. I can’t wait to see you all in a few weeks’ time”.

Network Ireland’s National President Aisling O’Neill says “It’s an honour to have Eímear Noone speaking to our audience at our organisation’s flagship event this year. From making history as a world-class female conductor and composer to encouraging and inspiring other young people in the industry, she has so much wonderful experience and insight to share with us. The event is going to be a real highlight of our year”.

As well as the exciting speaker schedule, Network Ireland will announce the winners of their Businesswoman of the Year awards at the event. 72 regional winners were selected from over 430 entries around the country, and they will now be finalists for the 8 categories at the national awards.

Enterprise Ireland is event partner for the occasion and tickets are on sale now via networkireland.ie.  All proceeds from streaming ticket sales will go to Network Ireland’s charity partner for 2021, Focus Ireland. AIB is the official national partner of Network Ireland.