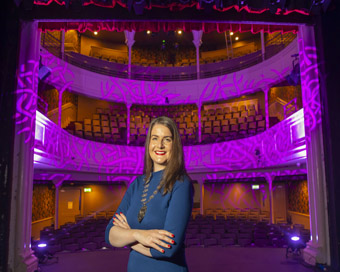 World-renowned immunologist Professor Kate Fitzgerald has been unveiled as one of the speakers at Network Ireland’s Annual Conference and National Businesswoman of the Year awards, which take place at Waterford’s Theatre Royal on October 8th.  Professor Fitzgerald, who is from Waterford originally has made many important scientific discoveries during her career and was this year inducted into the US National Academy of Sciences in recognition of her achievements.

She is now Professor of Medicine at the University of Massachusetts (UMASS) near Boston. Kate says she’s looking forward to the event: “I know how talented and innovative the women of Ireland are so I’m delighted to have been invited to this event and the awards which showcase the fantastic work going on around the country. That fact that it’s being staged in the fabulous Theatre Royal in my own home county is the icing on the cake!”

National President of Network Ireland Aisling O’Neill is proud to announce Kate’s involvement as she unveils the full rundown of events planned for the day: “We had already shared the news that superstar conductor Eimear Noone was going to be with us at our gala event and adding Kate Fitzgerald is both a fantastic development and a great illustration of the diversity of speakers and guests who will join us on the day”.

Another high profile name added to the guest list is Su Carty. As well as a speaker and coaching expert, Su is an IRFU representative to World Rugby and was the organisation’s first Women’s Development Manager.

The virtual audience will enjoy panel discussions on a wide range of issues affecting women and business in Ireland today including,

•Investing – how to go about it and how to attract investment for your enterprise, with experts from groups including the Halo Business Angel Network

There will be time too for a brief session on breathing and relaxation with Happy Feet Reflexology as well as music provided on the day by Alchemy Vox. Network Ireland’s 8 National Businesswoman of the Year Award winners will also be announced across the day.

She’s Next, Empowered by...