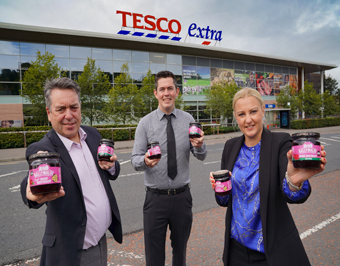 In addition, Ballymaloe Foods has agreed a deal with Tesco in Northern Ireland to stock Ballymaloe Pickled Irish Beetroot for the first time. Consumers in Northern Ireland are now able to pick up a delicious jar of Ballymaloe Pickled Irish Beetroot.  The Beetroot is available in dices or slices and is a great accompaniment to salads, sandwiches and much more. Ballymaloe Foods is working in partnership with Valeo Foods to distribute its products.

General Manager of Ballymaloe Foods, Maxine Hyde said: “We have strong ambitions to grow in Great Britain and Northern Ireland. There is so much love for the brand across retail and foodservice and it is wonderful to see that our Original Relish is on Tesco shelves in every corner of the UK. Our products continue to be extremely popular in Northern Ireland and the addition of Ballymaloe Sliced and Diced Beetroot means even more choice for the consumer. Over the last few years our Original Relish has become the go-to relish for many foodservice places in the North and we are delighted to be appearing on menus in places such as General Merchants, Blend and Batch, Toast Office and RetrosGrilled Cheese.”

Peter Rodgers, Business Manager, Valeo Foods Northern Ireland added: “It has been fantastic to further develop our partnership with Ballymaloe Foods and Tesco Northern Ireland with the listing of the award-winning and delicious Ballymaloe Beetroot products, which we supply from our Lisburn warehouse.“

All the beetroot used by Ballymaloe Foods is planted, pickled and packed locally in East Cork making it the only 100% Irish locally produced beetroot available nationwide. The entire range of Ballymaloe Sliced and Diced Irish Beetroot has been recognised at the Great Taste Awards in 2020 and 2021 and displays the unmistakable black and gold logo, a stamp of excellence that is recognised by retailers and consumers alike.

Women feel less confident than men when it...