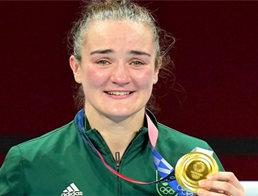 On her win she said, “I might have got the gold – but we are all champions.”

This is the country’s 11th ever Olympic gold medal and our second in Tokyo. Harrington’s success on Sunday morning was the third time Ireland has won Olympic boxing gold.

“I can’t put it into words. If I could be in two places at the one time I would be at home as well because I would say the atmosphere is fantastic,” Kellie said.

Michael Carruth (who secured a gold in Barcelona in 1992) offered Kellie his congratulations, “I am so so happy and proud this morning. What an amazing fight! Enjoy the celebrations, welcome to the club champ.”

“Hers is an exceptional achievement, and she is an inspiration for us all”.

Dr. Ann Kelleher has been appointed...