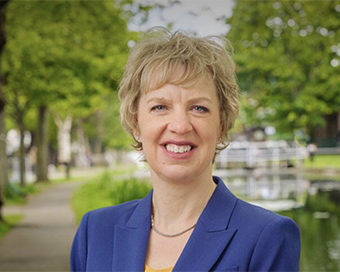 On Friday (9th July, 2021), Labour Senator Ivana Bacik was elected as a TD in the Dublin Bay South bye-election after the ninth count. She will take the seat vacated by former minister Eoghan Murphy to become the 37th woman elected to the 33rd Dáil.

Senator Bacik is a long-time activist on Repeal the 8th, human rights and civil liberties campaigns and acknowledges,

“I’ve been campaigning for a fairer, better Ireland all my life”.

As a parliamentarian she brought forward more legislation than any other senator.

Ivana grew up in Rathgar/Terenure and lives in Portobello with her young family. She is a lawyer and has taught law over many years in Trinity College Dublin. As a student activist Ivana was taken to court and threatened with prison for providing information on abortion – in a case that paved the way for repeal of the Eighth Amendment and legalisation of abortion in Ireland.

Ivana was first elected to serve in Seanad Éireann in 2007. An experienced legislator, Ivana has seen more of her opposition bills become law than any other senator. Her reforming legislation has tackled issues such as working conditions for freelancers, secular marriage, women’s health rights and LGBT equality.

Ivana is a keen cyclist, swimmer and climate campaigner. Ivana’s surname is Czech. Her paternal grandfather was imprisoned by the Nazis. After WWII, he moved to Ireland with his young family, where they settled in Waterford. Her mother’s side of the family are very proud Murphys from Co. Clare.

In the run in to the bye-election, another historic event was marked by Ivana Bacik.

On July 5th, Senator Bacik congratulated all campaigners, including Work Equal and the National Women’s Council, following the passage of the Gender Pay Gap Information Bill. Having first brought forward gender pay gap legislation four years ago in 2017 with the support of the trade union movement, Senator Bacik said there is still more to be done to achieve gender equality in the workplace.

Noting her Reproductive Health Related Leave Bill which would provide women with leave in the event of an early miscarriage or having to take time off work for IVF treatment, Senator Bacik reiterated her call for Ireland to catch up with other jurisdictions that have passed similar legislation.

“Today (July 5th, 2021) is an historic day as the Gender Pay Gap bill has been passed, having completed its final stage in the Seanad. It is four years since I first brought forward legislation on this and unfortunately we have seen unnecessary delay since then.

Ireland’s gender pay gap of 14.4% effectively means women work for free from 9th November each year. Put another way, women stop getting paid at around 4pm every day.

This continued discrimination against women in the workplace must be meaningfully addressed through enacting this vital piece of legislation without delay.

“In 2017-18, my Bill to tackle the gender pay gap – the Irish Human Rights and Equality Commission (Gender Pay Gap Information) Bill 2017 – passed through all stages in the Seanad and through Second Stage in the Dáil with strong support from across both Houses, including from Minister O’Gorman’s colleagues in the Green Party. The previous government failed to progress this Bill further, choosing instead to introduce its own, weaker legislation. The Government’s bill which has now passed is still less ambitious than our Labour Bill, which would have required any organisation with more than fifty employees to publish gender pay gap data. I put down several amendments today at report stage seeking to strengthen the Bill and extend its reach, and was glad to engage constructively with the Minister during an important debate this afternoon.

“Ireland has made significant strides towards achieving gender equality in the workplace, but there is still some distance to go.

“Labour’s Reproductive Health Related Leave Bill would provide an entitlement to reproductive health related leave of up to 20 days for women who suffer a miscarriage, and up to 10 days for those seeking treatments such as IVF… This Bill would go a long way in breaking down this stigma, as well as building more compassionate workplaces.”

Here at WMB, we watch with interest as Ivana Bacik, 37th Woman elected to 33rd Dáil, pushes for more positive change in the next stage of her career.

Kellie Harrington did us proud after...