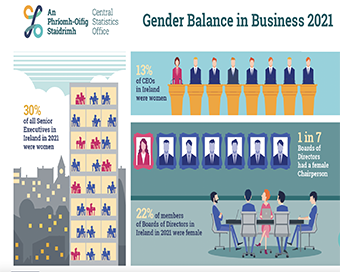 The Gender Balance in Business Survey aims to provide statistics on gender representation in top management teams and boards of directors in Ireland. This second iteration of the survey asked large enterprises (250 or more employees) to provide information on the members of both their Senior Executive team and Board of Directors on 1st January 2021. Nearly 700 enterprises were surveyed online with 67% of those completing the survey.

The survey reports that:

•One in eight (13%) Chief Executive Officers (CEOs) in large enterprises in Ireland in 2021 were women.

•Three in ten (30%) Senior Executives were female compared to seven in ten (70%) for male.

Enterprises with at least 40% female representation

Almost one in five (18%) enterprises had at least 40% female representation on their Board of Directors. A quarter of Service enterprises had met this target compared with just 7% of enterprises in Industry & Construction.

Network Ireland has welcomed CSO figures showing female representation at chairperson level among large Irish companies almost doubled in the past 2 years.  Measured at 7.4% in 2019, the statistics show the figure jumped to 14% in 2021. Reacting to the news, President of Network Ireland Aisling O’Neill said:

“This is hugely encouraging for women today – particularly considering the upheaval of the past 18 months and a series of reports showing women’s working lives have been heavily impacted by the pandemic.

We know that visible role models are vitally important and I’d like to congratulate these women taking on chairperson roles in their companies for all they’re doing to advance their careers and thereby encourage others.

They are key to fulfilling the promise of the principle surrounding ‘if we can see it we can be it’.

Across most of the positions surveyed in this CSO research of large companies, female representation was broadly level or slightly up on 2019 figures. I hope today’s news brings more encouragement to women around Ireland, over a thousand of whom are Network Ireland members, that they have the potential and ability to take on the most senior roles in their workplaces”.

Feeling the Impacts of...