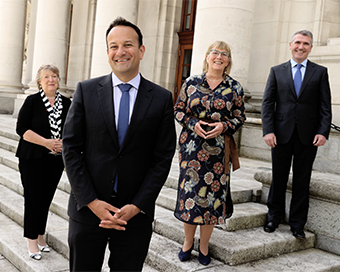 The Tánaiste and Minister for Enterprise, Trade and Employment Leo Varadkar T.D., has announced the appointment of Julie Sinnamon and Aongus Hegarty as the new co-chairs of Balance for Better Business (B4BB). Balance for Better Business is an independent review group which was established by Government and is tasked with improving gender balance in senior business leadership in Ireland.

Julie is the former CEO of Enterprise Ireland and Aongus is President of International Markets at Dell Technologies. Both have been among the key business leaders on the B4BB Review Group since 2018. In their new roles, they will continue the work of outgoing co-chairs Brid Horan and Gary Kennedy in engaging actively with the business community to advocate the business benefits of gender balance at board and senior leadership levels.

The Tánaiste thanked Brid and Gary for their work over the past three years:

“By failing to include women in leadership teams, businesses ignore the talent of half the population.

I launched Balance for Better Business in 2018 to correct this disparity and I really welcome the significant progress that Brid and Gary have made during their tenure.

Brid and Gary are leaving Balance for Better Business in good hands. Both Julie and Aongus have been members of the Review Group since 2018 and have extensive knowledge and experience in driving gender balance and diversity in business. I look forward to working with them both over the coming months and wish both Brid and Gary the very best of luck in their future endeavours.”

Since its launch in 2018, Balance for Better Business has driven significant change by reviewing the situation of women in company governance and senior management, and identifying measures to increase their representation, including setting progressive targets. Its work covers companies listed on the Irish Stock Market (Euronext Dublin), private companies and multinational companies with significant operations in Ireland.

Bríd Horan, outgoing co-chair B4BB, said: “It’s been an honour to serve as Co-Chair of Balance for Better Business with Gary Kennedy since its launch in 2018 and to work with our Programme Director, Anne-Marie Taylor, and committed colleagues on the Review Group.   We’ve shone a light on the low percentage of women on company boards and in senior executive positions through structured analysis, engaged with decision makers on measures to increase this and have set progressive targets for change.

In this time, the percentage of women on the boards of the top publicly listed companies in Ireland has increased from 18% in 2018 to 30%, and the gap between Ireland and the EU average has reduced from eight percentage points to one percentage point.

Companies need to maintain and broaden this momentum to derive the real benefits of gender balanced leadership.

With sustained focus and effort, progress can also be made in smaller companies and at senior executive levels where there are still significant imbalances.”

Gary Kennedy, outgoing co-chair of B4BB, added: “It has been a privilege to co-lead this initiative and create momentum around an evolving targets based agenda. The individual contribution of Anne Marie Taylor and support to both myself and Brid was phenomenal.

I am proud that Ireland has made so much progress and for that I am eternally grateful to business leaders who listened to the mood music and embraced the direction of travel. They, like I, know we are still on the baby slopes and I encourage them to be pioneering and brave in continuing that leadership. Julie and Aongus will guide them on that pathway.

I continue to believe that meritocracy and diversity can both be achieved in equal components.”

Calling for Quotas on...

A 40 per cent legislative quota for female...