Boots off to them!

Posted In: Women Who Mean Business | So In Demand 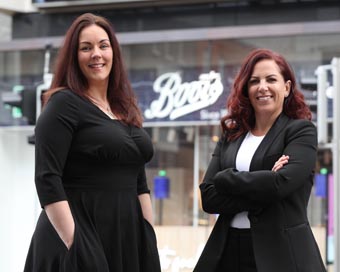 Boots Ireland has recently appointed Linda Nolan as Head of Marketing and Michelle Kearns as Head of IT, both of whom will join the Irish Leadership Team, supporting its pharmacy-led health and beauty retail operations nationwide. They join a team of 2,000+ colleagues across the company’s network of 89 stores and Head Office in Ireland.

Linda assumes responsibility for all marketing operations in the Republic of Ireland, overseeing a team of six people to deliver a multi-channel marketing programme responding to the ever-shifting consumer, retail and pharmacy dynamics.  Linda joins Boots Ireland from a leading consumer technology company where she worked for 14 years, most recently as Director of Marketing, a role she held for over six years leading a strong marketing team to success.  She brings extensive knowledge of consumer behaviours, and both store and online retail dynamics, to her new role at Boots Ireland.

Michelle takes on responsibility for the IT functions of Boots Ireland, a multi-faceted role which includes internal systems and boots.ie, which has grown exponentially in users since the onset of COVID-19.  The continued transformation and evolution of Boots starts with digital as a foundation to support customers, whether through a brilliant clicks to bricks experience, new ways of accessing health and wellness services or increasing levels of assurance around home deliveries.

Michelle joins Boots Ireland following almost 17 years working for a GP co-operative providing healthcare services throughout Ireland, most recently as the Chief Information Officer, a role she fulfilled for the last four years of her tenure with the company.  During this time, she was seconded to the HSE as a founding member of the Council of Clinical Information Officers and spent time as an adviser to the World Health Organisation.  In 2016, she founded, and still holds the role of Director, at One HealthTech Ireland, a network that supports and promotes openness, inclusion, kindness and diversity in health innovation.

Commenting on both appointments, Stephen Watkins, Managing Director, Boots Ireland said, “I am delighted to be announcing the appointment of Linda Nolan and Michelle Kearns to the Boots Irish Leadership Team. They both join with extensive careers in relevant sectors and I’m looking forward to working with them as we continue to evolve the Boots Ireland offering for both our customers and colleagues nationwide.”

Dublin City University is pleased to...