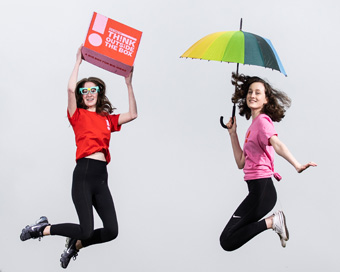 A new Transition Year programme aimed at teaching creative thinking to students has seen teens across Ireland applying innovation to five of the country’s major social issues, from the housing crisis to future pandemics.

The B!G Idea is now hoping to bag support through a fundraising campaign to deliver the 2022 programme, which already has a waiting list of thousands of students.

Year one of B!G Idea has already brought 500 students from eight schools through the new, 15-week programme, the brainchild of Carlow-based social entrepreneur and industrial design expert Kim Mackenzie-Doyle. Kim decided to use her two decades of experience in the creative industry to build the Transition Year programme over the last 18 months, along with a team of award-winning creatives.

Kim Mackenzie-Doyle is a product design trailblazer from Leighlinbridge in Carlow. She is former president and a current director of the Institute of Designers in Ireland. Kim is also a member of the National Design Forum and the Expert Group For Future Needs Skills.

Two years ago, she won the Creative Industries Leader of the Year award. She is the founder of Mind Over Matter, which focuses on mental health awareness in the creative community and is also the founder of WhyDesign, an initiative working to address the gender imbalance in the design industry across Ireland, by showcasing inspirational female Irish designers. Kim was the only female designer working in Design Partners when she joined them 20 years ago, where she designed the world’s best-selling computer mouse, the Logitech MX305.

The B!G Idea wants to bridge the gap between education and industry, and to connect top innovators with students for tangible and long-lasting impacts.

A total of 62 project proposals focusing on the housing crisis, fighting pandemics, the ageing population, combatting racism and managing teens’ health and wellbeing, will soon be pitched by the rural, urban and DEIS pupils from the inaugural Clare, Limerick and Carlow schools.  They will be judged next month with a winner from each of the five categories and one overall winner announced at an online awards event.

“Creativity can be taught,” said Kim. “Ireland has the most progressive innovators with creative mindsets on the world stage, but we are not educating for creative or innovative thinking, or problem solving. We know that by 2025, creativity is one of the top skills that our world will need,” she added.

“Our education system doesn’t teach creativity as a standalone module. Sadly, we stop encouraging creativity as children get older. Education needs to evolve.”

B!G Idea students are learning skills they will use in the workforce as the next generation of innovators. Kim elaborated: “We equip students with the creative mindset to tackle the biggest problems they will face and support them to respond to a range of innovative programme briefs.”

The programme has a whopping 101 mentors from a range of disciplines, with creatives such as Dermot Bannon, Diarmuid Gavin, Roisin Lafferty, Timi Ogunyemi and Lorna Ross also judging the projects. It has so far attracted the support of Irish innovators such as MSD, UX Design Institute, Netwatch, Blacknight, Applegreen, Portwest, Creative Ireland and many more.

The programme already has a waiting list of 10,000 eager students and teachers for 2022 and hopes to eventually introduce creativity modules for younger and older pupils. However, with plans to roll out the programme to 2,000 students next year, Kim says funding support is now needed.

“The B!G Idea is a social enterprise and not-for-profit so we would love to see sponsors jump in to help us reach more students.”

“Sponsors can click onto our support page online and strengthen the programme whether through sponsoring one student, one class or even a school.

“We want to position Ireland as the most creative, innovative nation in the world by empowering a new generation of problem solvers,” she said.

John Cullinane, Deputy Principal of Carlow’s Presentation De La Salle College in Bagnelstown, which is one of the participating schools, said greater levels of creativity and innovation was needed now more than ever. “The world that we live in today requires greater levels of creativity and innovation than at any time in our history. As evidenced by the design briefs for the 2021 B!G Idea programme, we live in an increasingly complex world experiencing unprecedented challenges that require creativity, innovation, collaboration and determination to manage and overcome,” he said.