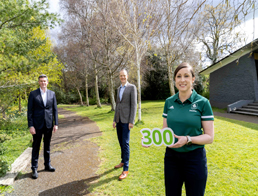 Deloitte Ireland recently announced that it will add 300 new jobs in response to strong demand for business transformation and advisory services. Job opportunities will be in all areas of the Deloitte business including Audit, Tax, Consulting, Financial Advisory and Risk Advisory.

The majority of these roles will be in Consulting, 100 of which are being recruited for immediately, with the remainder coming on board over the next year. Opportunities are available for professionals in digital/cloud and systems engineering, customer design, future of work, digital finance, digital supply chain, business operations, data analytics and cognitive technologies.

More broadly, Deloitte will be looking for people over the next 12 months in the areas of regulatory risk, restructuring and transaction services, actuarial services and marketing. The business will also be recruiting for audit and tax specialists in the consumer and financial services industries.

In addition to embarking on this significant recruitment drive, Deloitte Ireland also announced that it has signed a four-year deal with Team Ireland. It will be an official partner to the Olympic Federation of Ireland from now until the end of 2024. The deal will see Deloitte partner with Team Ireland for the Summer Olympic Games in Tokyo in July and the Winter Olympic Games in Beijing in 2022. In addition, it sees Deloitte as the first official partner for the Paris Olympics 2024. It also covers the Summer and Winter European Youth Olympic Festival, and European Games.

Ideas have the Power to...

The Cool Planet Experience is a social...